Some fun Reds moments that didn't make the year book.

Share All sharing options for: Five unofficially favorite moments from 2012

The Reds official site posted a video reel of the their Best 10 moments of 2012. They hit all the high notes and it's just the kind of video that should be on stand-by right after a team is eliminated from the playoffs.

Meanwhile, distinguished Red Reporter Andromache took a cut at "Ten Awesome Things that Happened" over at C-Ing Red -- a thorough list of milestones, flashpoints and facts about 2012 that deserved to be remember despite the way the season ended.

Anything I add would be noise.

But there were a few moments this season that I found meaningful and which might also be left out in the sweeping narrative of what happened this season. Here they are, in no particular order...

After a rocky mid-June and two straight blown saves, Chapman nailed down a win against the Brewers by striking out the side. He celebrated with two forward somersaults.

This got a lot of play during the baseball news cycle right after it happened. But it was subject to much hand-wringing by the Reds and we all moved on to other things. I thought about it again when Sergio Romo wildly beat his chest after the final out of the NLDS.

Maybe the only difference between celebrating and "showing up the other team" is where you sit. But what I think sets Chapman's display apart was the spontaneous outpouring of both joy and relief. This wasn't a choreographed ceremony of conquest, but almost a genuflection. Rolling on the ground is a humble and innocent act.

It also served as a reminder that this is a game, played by young people. And that Aroldis Chapman is a young person. I like to be reminded that I'm not just watching someone working. 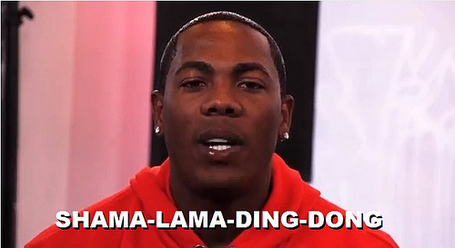 Even though he was one of the most dominant pitchers in the game this season - and owns the fastest pitch in human history - he's going to hit rough patches. And somersault over them.

Jay vs. the Volcano 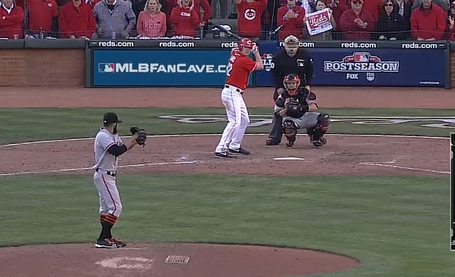 This was ultimately the most disappointing moment of the season. But, at least for me, it was also the most riveting. The entry in game log that reads "Jay Bruce flies out to left fielder Xavier Nady" is a poverty that hides the 12 pitch battle Bruce gutted out and we all hyperventilated through. Ludwick stood on first, while Votto was on second clapping, fan-like, for his good friend. We all held on, white-knuckled, to the remains of the season.

This might be stretching the definition of "favorite" a little. I certainly hated the 12th pitch of that at-bat. But, for depth of feeling, it was unmatched.

On September 10, the Reds were pretty secure in their NL Central lead - 8.5 games with 20 to go. But this game might have been the Great American Insurance Win. Their lead would never dip below 9.0 games the rest of the season.

It was the longest game of the season - in time and innings - and exemplified the team's stubborn success. Even though BP and Votto combined to go 1-10 and Chapman struggled through a 3 walk inning, they won it in a walk-off 14th inning rally started by Devin Mesoraco (hope) and ended by Ryan Ludwick (revival).

Just another way to get on base

This was the hit-by-pitch equivalent of when Superman looks mildly inconvenienced when he's buffeted by bullets. It's also a good visual metaphor for how the Reds dealt with Joey Votto's time on the DL. Although it gets kind of confusing if Votto represents the team. And then Buster Posey is Votto? It's a terrible metaphor.

In any case, this was cool as hell.

While Chapman was going on hiatus, Sam LeCure was busy becoming him. LeCure had a number of highlights this season - including two scoreless innings against the Tigers in which he struck out MIguel Cabrera - but he really hit the gas as the playoffs approached. Sam struck out 14 batters in 10 innings during September, allowing a .260 opponent OPS.

LeCure has been an underground fan favorite at least since OMGReds led a grass-roots campaign to get him a Bobblehead before he'd even made his MLB debut. He's built up his esteem by being active on Twitter and making himself available for mustache comparisons with Red Reporters.

So this was fun to watch. And, hopefully, evidence that this bullpen was more than lightning in a bottle.

Despite his tactical deficiencies, I enjoyed Dusty this season. I was relieved to see him back in the dugout after his hospitalization. A lot of that has to do with the whole 97 win business. And basic compassion. But some of it also has to do with how much fight is left in the man. He's a fierce advocate for his players - and that makes it easier to support him as a fan.

When Derek Lowe launched a paranoid-sounding rant about having "no respect" for Dusty, which traced its origins back to some incident lost in the fog of baseball, Dusty had some choice words, including this:

"Man, I don't care," Baker said. "A lot of people don't respect me. He don't respect himself. The word was whatever he did and said probably there was a good chance he was drinking at the ballpark and he don't remember what he said or what he did."

Flea in a Reds uniform