Since no media member is rational, none will allow us to forget the Reds/Cards brawl of 2010. Well, if we can't forget it, at least we can watch Scott Rolen hit a thunderpump off a broke Carpenter breaking ball. Right.

As we bear down on the postseason, to me, at least, the most intriguing storyline (and one that has been very, very quietly swept under Chipper Jones' rug) is Scott Rolen getting the nod over Todd Frazier as the starting 3B. Rolen, in the last year of his contract, may well be entering his last postseason, and the decision to have him play in front of Frazier stems both from his superior defensive play and from the belief that he can be a viable middle of the order RH bat. Both he and Frazier have cooled off mightily over the last month after scorching Augusts, but tonight Rolen boomsticked a Chris Carpenter too-slickball, and looked dang good in the process. If this is, in fact, Rolen's last go around as a Red (and if Dusty is committed to him being the full-time postseason 3B), it's encouraging to see him light up a pitcher of the quality of Carpenter.

Honorable mention is due to Mat Latos, who notched his 14th win of his first season as a Red. While he missed out on reaching his 600th career strikeout, he dominated the Cardinals in an abbreviated start. Latos will finish the regular season with an ERA of 3.48 and a WHIP of 1.16. Care to know his career averages for each stat? ERA: 3.42, WHIP: 1.16. We got what we paid for, folks. Dude's a stud.

The supergrover Memorial Honorary Red Reporter(s) of the Game

Anyone and everyone who called out the Brennamen on their Bruce hate before his RBI single. On the swing before Bruce's single, Marty spoke of how that swing and a miss "stirred up a dust storm." Yeah, well, if it's up to me, they can both gladly bitch and moan about winning playoff games 2-1 and look stupid in the process.

Look, it's been well documented that the Reds have historically won with great offense and mediocre pitching. Marty's been around for 38 years and has never seen a team as effectively constructed as this one, so perhaps he just doesn't know how to value it; 'tHom, on the other hand...well, who knows what the hell his problem is. Either way, they're beginning to sound far too much like jerks while calling a team's 97th win of the season. 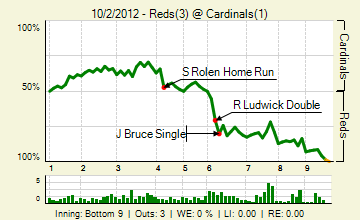