Just as losing three games at home in the playoff's won't erase the joys obtained during the 2012 season, those joys will not take the taste our of our mouths from this past week. Instead, we are forced to mix the two together, like what happens when you waste good whiskey in a Manhattan. You want to just drink the bourbon, but the bartender has already ruined it with stale vermouth. The solution? Slam it down and move on to that new cool bar the kids call 2013.

A few years ago, if you purchased a book on urban blight, Amazon.com would recommend that you also purchase a travel guide for Cincinnati. Well, folks, those days are no longer. The Associated Press has pointed out what we've all subconsciously noticed throughout the past year: that Cincinnati is turning into a bit of a happening town. And frankly, what better way to showcase that than to turn to Red Reporter's own Poet Laureate and Arbiter of Cool, Madville? At this rate, Cincinnati will be up there with Williamsburg, Brooklyn and Austin, Texas when it comes to hipness by the time the Reds win their next home playoff game.*

*We hope that everyone realizes that Austin and Williamsburg are kind of lame within the next ten months.

At last count, Adam Sandler has done approximately thirteen movies premised around the same jokes. While his humor may be tiring due to its repetitive delivery, the material can be a source of entertainment when someone is able to breathe some new life into it. For Adam Sandler's "Red Hooded Sweatshirt," that new life came from Bronson Arroyo and Aroldis Chapman. Sure, you can say this isn't news since the video was recorded back in June, but let's be honest: the national media didn't pay attention to Cincinnati until October.

We here at RIWIAW are the first to admit that it gets tough after a while to come up with new spin on the same old stories regarding baseball games and playoff matchups. That's why we bring to you stories about managers being so #drunj that they cannot even recite the alphabet correctly. Therefore, we sympathize with reporters laid off reporters bloggers laid off bloggers freelance writers like C. Trent Rosecrans, who have to make up random stuff to report on when they don't want to analyze baseball games. After Wednesday's loss to the Giants, CTrent (Follow him on twitter @madeasimmons), decided it would be hella cool to write about how awful the Reds fans were for booing their own team. Now, we won't get into the absurd hypocrisy of this cheap attempt at page clicks article, since BK has done a pretty excellent job here. We will say that perhaps, in the future, C. Trent could mention the player actually being booed and provide some context (like Jose Arredondo blowing the game wide open by giving up multi-run homers). Also, Trent could also wait until the series ends to see how the Reds fans react to a clinching game. Then again, that would make him miss his deadline since he doesn't really know how to write about baseball (Editor's note: neither do we!)

Thursday: Rock Bottom is Deeper than you Think

Friday: Comment(s) of the Week - Requiem 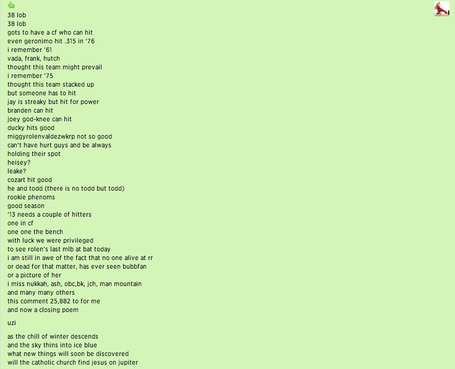 We here at RIWIAW do not discriminate based on political beliefs (because we totally vote for the hotter candidate regardless of party). However, when a former Red uses Twitter as a medium to get across a political point of view, it almost always gives us a reason to address that topic (and get page clicks from birthers, hippies, RON PAUL, and members of the Registered Sex Offender Party of Delaware). Such is the case of former Reds reliever Todd Coffey. The Big Pot's twitter feed became wildly active during the Vice Presidential Debate articulating his views on where the country should be headed. Under most circumstances, we'd applaud him. However, and unfortunately, it turns out that the views weren't of Todd, but rather his 14 year-old son. Oddly enough, Little Coffey's views were still more articulate and intelligent than recent quotes by Luke Scott, Chad Johnson, and about two-thirds of all state legislatures.

The following is a quote from Hal McCoy:

1. Is Dusty Baker coming back as manager or will he walk away? It is believed the Reds have offered him a short-term contract but he is seeking a long-term deal. The Noisy Minority wants Baker to find an out-of-state job, but The Silent Majority appreciate what he did this year against most odds as body after body went down in battle.

Hal you are so out of touch with the typical Reds fan. I guess that can happen with years of being an "insider." "SILENT MAJORITY" ARE YOU KIDDING? Every Reds fan I know has been outspoken during the past several years over one issue, getting rid of Dusty Baker!