The whirlwind ride that was the 2012 Cincinnati Reds landed softly today, dashing hopes and forcing us to ponder new ways for our heroes to help us cheer. Somewhere, a five year old Reds fan is in tears, distraught that the first team he'd come to love just wasn't quite good enough. Somewhere else, everywhere else, Reds fans of all ages know exactly how he feels.

Share All sharing options for: It's the End of the World As We Know It. Reds Lose, 6-4.

Hopalong Cassidy swung into the saddle, and with Mesquite at his side the two started up the trail. In the distance a muffled avalanche of thunder rolled and rumbled. Through the storm clouds the afternoon sun sent streaks of cathedral light across the sky and the first spattering of drops fell, dappling the ground and making dust jump.

"Red Connors is meeting me out there," Mesquite said as they rode out of town. "And if we can find Jonny, we'll send for him. It'll be like old times again."

"Well, lead on then," Hopalong Cassidy said, tugging his hat down on his head. "I always did like ridin' in the rain."

Ryan Ludwick went 2 for 5 today, and both of his hits were the closest things the Reds had to momentum shifters. Ludwick hit an upper deck moon shot - his 3rd HR of the series - to cut the lead to 3, and he singled in the Reds 4th and final run in the ill-fated 9th inning rally. He did, really, what he'd done for the Reds all season long, but what had been the single largest staple of the Reds success this season, starting pitching, simple didn't get the job done. These are the punches we roll with.

Honorable mention is due to Joey Votto, who went 2 for 4 with a walk, meaning he finished this series with a .389 average and .500 OBP despite being visibly in discomfort throughout. Also worthy of dap is Brandon Phillips, whose 2 for 5 day left him with a .985 OPS and 7 RBI in the 5 game set. The bullpen combination of Sam LeCure, Sean Marshall, Jonathon Broxton, and Aroldis Chapman also were rock solid, tossing 4.2 innings of 2 hit, no walk ball. 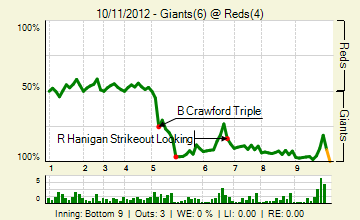