Bronson Arroyo, secretly a Double-Secret Extra Double Double-Secret Double Agent, pitched well enough to get over the 200 IP threshold for the 7th time in 8 years AND make sure Magic Johnson moves on to NBA season quickly. He, like I, believes Drew Stubbs will homer off of Tim Lincecum to clinch a Reds NLDS series win in Game 3. Karma, folks.

Honorable mention is deserved by Drew Stubbs, who was the only Red to reach base multiple times tonight. Let it be noted, for the record, that both of Stubbs' hits were off a LHP, and that's exactly the kind of situation in which he needs to be used. Stubbs has his faults, and they're obvious; that said, Stubbs also has his strengths, and those, too, are obvious. He's not the type of player that can succeed for 160 games and 700 PAs, but he can succeed in situations that match his talents. Incidentally, one of those talents is hitting monster bombs off of Lincecum in playoff situations.

The supergrover Memorial Honorary Red Reporter(s) of the Game

We RR's are a loyal bunch for certain. We're dedicated, we're passionate, and, lately, we travel quite freaking well. Tonight's honor is (and should be) bestowed on those great RR's who, despite the fact the Reds have already clinched, decided to road trip to St. Louis to catch the end of the season in enemy territory. To my knowledge, current STL residents Cy Schourek and Eastwindquinn are putting up with the likes of -ManBearPig, Charlie Scrabbles, and crolfer, and my lord, that's quite the crew of folks. I pity the fools that walked into their seats to find that crew sitting next to them.

Props for the team pride, boys. I can't wait to read the eyewitness report. 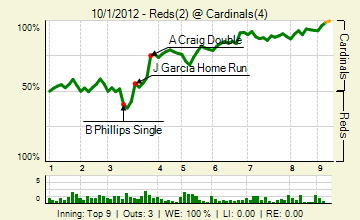