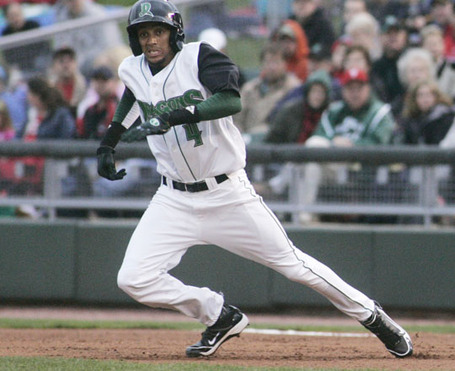 In a turn of events that should surprise no one, Billy Hamilton is the RR 3rd ranked prospect. Personally, I had him at #2, due to his blazing speed and switch hitting ability. He's still essentially a lottery ticket at this point, but if he gets it together, isn't he a less powerful Jose Reyes? I think I'd take that.

I'm expecting a tighter race today to close out the week. No new choices today, go and get it done!

Pros: Shown an ability to hit for power, lots of XBH too. Versatile on defense. Good clubhouse guy. Cool nickname and at-bat music.
Cons: Doesn't really have a set position, and isn't above average anywhere. Plate discipline is suspect.

Pros: Tool shed--Chance for above average power, speed, contact skills, and defense.
Cons: Durability--has only played 122 games total the last 2 seasons. Very raw both at the plate and in the field.Very aggressive plate approach.

Pros: Breakout season last year, finally showing the bat to profile at 1B. More raw power than anyone in the system not named Juan Francisco. Still relatively young given his level.
Cons: Strikes out a lot, doesn't walk a lot. Didn't get going until about July last season. Can he sustain that production for a whole year?

Pros: Good size, outstanding velocity (has hit 97), good control, and a potential plus curveball. Supposedly has a very good makeup.
Cons: As a high school pitcher with no pro experience, he's about as risky of a prospect as there is. Can he avoid injury, develop his secondary pitches, and consistently get professional hitters out?