2012 Community Prospect Rankings: The heady LaMarre is our 20th prospect on the list

Share All sharing options for: 2012 Community Prospect Rankings: The heady LaMarre is our 20th prospect on the list 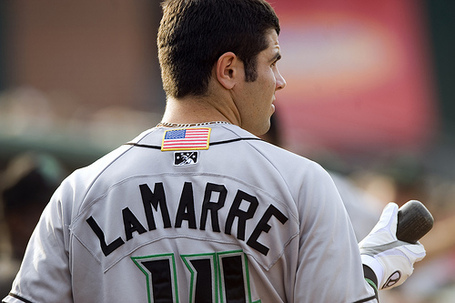 Ryan LaMarre impressively wins his first trip onto the ballot. I'm wondering, it must be just name recognition at this point, right? Not much has been made about his impressive base-stealing year, but a prolonged slump in April and a huge BABIP swing in May (.403) make me not too thrilled with that season, in that run environment, from someone who should be so far ahead of his peers there. Let's hope he makes major improvements in Pensacola next season.

Pros: Toolsy. Will be a monster at the plate if he can get his mechanics together and figures out how to hit. Time is on his side.
Cons: Still really raw. Went up a rookie ball level and numbers didn't improve. Does not walk.

Pros: Showed a ton of power potential, hitting 14 HR in 225 AB. Good bloodlines.
Cons: Struck out a lot, needs to curtail that. Doesn't have a track record for hitting for average in college.

Pros: Dayton's shutdown closer in 2011. Throws 3 pitches with good velocity on his fast ball (91-94).
Cons: Needs to improve command with his fastball and secondary pitches.

Pros: Showed good power potential. Should advance fast through the system. Versatile in the field.
Cons: Could walk more. Attended a school that jch likes.