Continued from a brief hiatus as my computer crapped out for a while. And to give something to amuse you for 10 minutes on your [DEVICE THAT COULDN'T HAVE BEEN CONCEIVED OF 20 YEARS AGO HERE]. As a way for us to keep our baseball minds warmed up and our senses of irony attuned, I'd like to welcome back the series for a second half. I've gotten the imprimatur from our feared leaders to continue this, and I really want you all to get involved. So let me and us know which names you like most, which names are boring, and in which ways I'm trying too hard. We can't get anywhere without criticism.

Old people names are funny. To go back to our old introductions...

Let’s go through each decade of Reds’ history, from 1890s through the 2000’s and select the greatest names. We will have three categories: Best Name, Most Cincinnati Name, and Most 1980’s Name. I will list the names and how they got on the list below, and then choose my winners. Feel free to disagree in the comments.

Mario Soto: There is nothing about the Cincinnati legend I dislike. From the 274 K's to the intimidating delivery to the incredible accordion skills. And then in my bing search for him, I found the headline: "Mario Soto was no fan of Jay Marriotti" I won't ruin the end, but I will say that it includes this:

Paul Householder: Is, in fact, the real Paul Householder. Not very good, but was probably impervious to the "if you don't hit, you'll be selling real estate in 5 years!" insult.

Sheldon Burnside: A South Bender, and if you didn't think a guy could have a long time in the Majors with a name like Sheldon well...you'd be right.

Bruce Berenyi: A proud Truman State alum and someone I always thought was Japanese. I never thought of Bruce as a fat dude name thanks to Jay, but now that I consider all of the Bruce's I know, yeah. It's a fat dude name.

Rafael Landestoy: The opposite of Bruce, there was no chance Rafael would be >170 lbs. If Broken Lizard ever made a baseball movie, there is no doubt who Jay Chandrasekhar would play.

German Barranca: Was neither German nor a Barranca. Discuss.

Wayne Krenchicki: Had a couple good years in the Chris Stynes/Jeff Keppinger role (soon to be the END role?). Wayne, Bruce, and Sheldon. Geez, no wonder the 80s Reds sucked.

Kelly Paris: Furthering my notion that crappy middle infielders have the best names. Was from Encino back before Brendan Fraser (back before he wasn't cool) made it cool .

Dann Bilardello: My first reaction when I saw his name was "my goodness, he's a catcher, isn't he?" and it turns out I was right. He also made his debut the year they moved Bench off of home plate. No pressure, kid.

Skeeter Barnes: Born, raised, and educated in Cincy (a Bearcat). I originally would've thought that Reds fans would've loved a guy like that, with a name like that, but then again, maybe not.

Dallas Williams: There have amazingly been three Dallas Williamses in baseball, but his is the only one to break into the majors. Not like he did anything when he was there, though. Oh, he's disappointingly from Brooklyn.

Keefe Cato: It's too bad he wasn't a very badass pitcher with such a badass pitcher name. Is also high as hell right now (but not as high as the dude trying to sell an autographed Keefe Cato card for $16).

Tom Lawless: No word on whether he hung out with Dallas Williams, but it's at least nice to see the Reds getting a bit more badass (if not necessarily talented) as the '80's moved on. Interestingly enough (but only just enough) was the guy traded to the Expos for an old Pete Rose.

Jay Tibbs: Was five years old and living in Birmingham, AL when The Heat of the Night came out. All the same, I hope after every strikeout he yelled "What's my name? What do they call me?"

Sal Butera: A catcher, of course. There's never going to be a "Sal" patrolling centerfield. Besides a season and a half in Cincinnati, his career took him to Detroit, Minnesota, Montreal, and Toronto. Dude probably had a closet full of parkas, is what I'm saying. His son, Drew, has been catching for a couple years for the Twins.

Jeff Treadway: Sal :: catchers, Jeff :: middle infielders (Jeffrey, as in Hammons, is a different name entirely). Who would've thunk Kepp would be the second Jeff from UGA on the Reds? That said, Jeff Treadway is such a lovely 80s baseball name. There was no way you're going to get a "Rafael Landestoy" or even a "Jay Tibbs" in a card like this.

Pat Pacillo: Reds first round (5th overall) pick, would pitch two years (50 innings, 5.9 ERA) thus starting a trend. But what the hell were you thinking, drafting a guy with a name like that?

Kal Daniels: Ask a man of a certain vintage and you'll hear a sigh of what could've been - he went .311/.408/.527 before being traded with Lenny Harris (THAT Lenny Harris) for Mariano Duncan (that's good) and Tim Leary (that's bad). His full first name is Kalvoski which, I mean, shit. Oh, and if you're in the greater Cincinnati area, watch out: Slyde is about to have a very loud, very messy, orgasm: 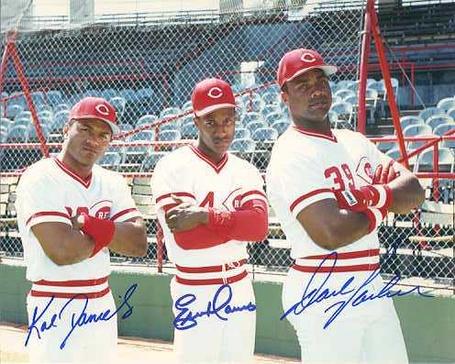 Luis Quinones: Pretty much Miguel Cairo before Miguel Cairo. Someone (I think Petey?) just loves making fun of him.

Candy Sierra: Born Ulises Pizarro Sierra. No idea why he changed it.

Rolando Roomes: The only Jamaican in Reds history, I believe.

Kent Tekulve: Famous for his Pittsburgh days, I didn't realize he grew up in town, went to Catholic and then Marietta College. Did the Scott Hammond Special, playing a year (poorly) in Reds garb before retiring. There is not a single picture out there that could make me not want to hang out with him. Also the impetus behind this awesome t-shirt.

I'll say it, it's tough to find a true winner in this group. A lot of ridiculous with a smidgen of tough guy, it's really a great mix. I hate to leave people out. But rules are rules, so here's our winners:

Most Cincinnati Name: Scotti Madison sounds most like the kind of guy now with a goatee and crappy sunglasses trying to start a fight over some West vs. East debate. This may reflect more on me than it does on Cincinnati.

Most 1980's Name: Jeff Treadway and Rafael Landestoy are really the white/hispanic sides of the same coin. It's tough to choose between the two, but I'll give it to Treadway solely because he has a rare collectible card due to designer error. It's an awfully 1980's reason to be famous.

Best Name of the Decade: Rolando Roomes and Candy Sierra loom large in our minds due to their strangeness, and Kalovski Daniels has to be worth consideration. But I'm having a hard time considering anyone to be in Keefe Cato's league. There's something both mysteriously alluring and side-splittingly goofy about it, like a protagonist in a spy spoof movie. I think it gets the award.