Ever since half our writing staff quit to go create outer space themed mad libs write speeches for the Newt Gingrich campaign, we've had a hard time adhering to our self-imposed Friday afternoon deadline. We could have avoided this delay by simply copying and pasting seven Tweets from John Fay. However, if we do that now, what are we going to do once we lose 18 hours a week from watching baseball?

Marty Brennaman has placed the Reds on notice that he wants to do more broadcasts with his son, Thom Brennaman. At this point in his career, Marty gets what Marty wants (see: Dunn, Adam). What does this mean for 2012 Reds fans? Well, here’s a Wordcloud from their most recent co-broadcast: 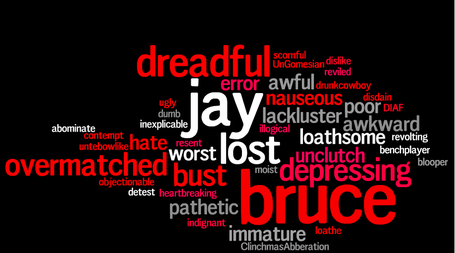 Sunday: If Political Reporter Was Interesting

We are all pretty much resigned to the fact that the Votto Window™ will be closing over the next 24 months. After that, we can brace ourselves for a serious fire sale the likes of which not experienced since the Houston Astros traded Joe Morgan to the Reds. When it happens, let’s hope that our farm system is strong enough to prevent us from having to sign John Boehner to a minor-league deal.

Our Reds are known to make questionable at-bat music selections. From Miguel Cairo’s choice of "Sex on Fire" to Scott Rolen’s Coldplay collection; it seems too many Reds prepare to battle pitchers by listening to shocking mediocrity. These missteps, however, are nothing compared to the tympanic terrorism committed by the Idaho Cubs. After watching this, one quickly understands every meltdown Carlos Zambrano has had while wearing Cubbie blue.

Thomas Wolfe wrote "You Can’t Go Home Again," a novel that uses the ever-changing landscape of America as a central theme. Regardless of their understanding of this impossibility, at the end of the day, some still try to return home like swallows to San Juan Capistrano. When they get there, they realize their home has been gated up, their relationships have become strained, and their favorite foods no longer come served in non-biodegradable Styrofoam:

Wednesday: I won't forget you, CoCo

We here at RIWIAW choose not to listen to Kanye West because sooner or later Girl Talk is going to condense all his good stuff into one song anyways. In that vein, we also choose not to follow anyone in the media on Twitter because the important stuff will get around to us sooner or later. After Tuesday’s hubbub with Prince Fielder died down, we discovered that Francisco Cordero signed a one-year deal with the Toronto Blue Jays for $4.5 million. Essentially this means that the Reds could have had an extra $3.5 million more to spend had they re-signed CoCo instead of Ryan Madson. This $3.5 million could have gone to this. Smart move.