2012 Community Prospect Rankings: DatDudeJC is 12th on the list 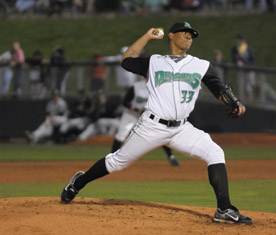 I'm not too surprised to see J.C. Sulbaran get his due to make 12th on our list. Despite his pedestrian-looking numbers, you have to take into account that it happened in the Cal League, and I'd expect those numbers to improve as he makes the move to Pensacola this year (yep, still not used to that).