Good writers copy. Great writers steal. Exceptional writers reuse plots while changing the names. In this regard, the Cincinnati Enquirer showed its exceptionalism today by showcasing Chris Heisey’s exuberance for the opportunity to become the Reds' everyday left fielder. Why do we say that? Because they wrote the same darn thing last year about Jonny Gomes. Truly, any concerns we currently have about left field are unjustified and irrational.

The trade of Yonder Alonso and crew for Mat Latos has yielded transaction and sabermetric fans (two demographics which comprise 85% of all Red Reporter readership) a new toy: TradeWAR. What is TradeWAR? The newest and greatest way to calculate a player's value to winning games! How is it computed? Well, you take your standard WAR of a given player and subtract the WAR from any other players traded into your division due to the acquisition of the previous said player. For example, the Reds acquired Mat Latos for Yonder Alonso. The acquisition for Alonso made the Padres trade Anthony Rizzo to the Cubs. Now that Rizzo is in the division of the Reds, to determine the actual value of Latos, you have to subtract the benefit the Cubs receive from Rizzo. Do you think this is dumb, overly complex or possibly impossible to calculate due to the high frequency that players are traded? Well, you either cannot comprehend logic or are lucky enough to have landed a gig at the Cincinnati Enquirer.

Monday: Larkin Inducted into the Baseball Hall of Fame! (COMMENTS OF THE WEEK) 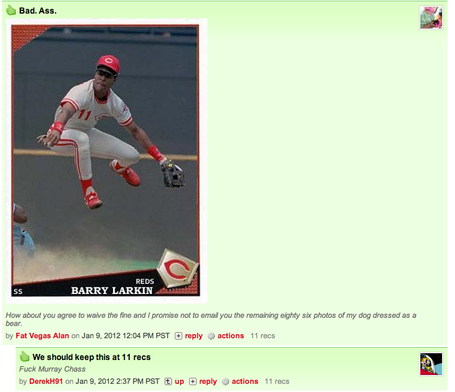 Remember when we used to think Leatherpants was an alright GM? You know, back when his competition was with people like Freddy Claire? We here at RIWIAW were forced to recall those memories this week when our RSS feed got lousy with stories from the New York press about Steve Phillips doing stupid things with interns contracts concerning Barry Larkin. Just remember, folks, it could have been worse. Not more embarrassing, just worse.

Wednesday: This week’s "LOOK AT ME, LOOK AT ME" Award

Did you ever wonder who are the egomaniacs that refuse to vote for shoe-in Hall of Famers like Barry Larkin in spite of the overwhelming evidence? It’s fools like Randy Miller (who?) of the CourierPostOnline (what?), a paper in suburban New Jersey (why?). It’s a good thing we have hard hitters like Miller who seldom fall for dumb gossip stories to question whether or not someone is deserving of being in the Hall of Fame. More importantly, I guess all writers should have the honor to work alongside J. G. Taylor Spink Award winners, like this one, before they earn a vote.

Do you know what we don’t do enough as a society? Prematurely grade things before they’re completed. That never happens. So, of course, whenever this occurs, it’s NEWS! In today’s close encounter with instant gratification, we have Jonah Keri of Grantland proclaiming that the Reds won the offseason by waiting on making transactions and not overpaying for mediocrity. Stay tuned next week to find which team Mr. Hill thinks REALLY won the offseason after signing Carlos Pena.

Friday: Every Day Is A Friday When You're At The Enquirer!

If we told our (paying) bosses how much time we waste on Twitter and on Red Reporter, we’d be out of a job (or be told that we have to find a way to extend a day to 35 hours). Luckily, the writers at the Cincinnati Enquirer are not tied to these restrains. Rather, the editors seem to relish the fact that their writers choose to blog about what happens on Twitter. Today’s idle question? "Would you pay $350 for a round of golf with Joey Votto?" What did we learn? That there are still people in the media that have yet to block @btcoop71.