If you're going to Juan Francisco, be sure to put some baseballs in the air. Reds win, 3-2.

Share All sharing options for: If you're going to Juan Francisco, be sure to put some baseballs in the air. Reds win, 3-2.

Juan Francisco.  El Nino Destructor disdains walks, so his value comes entirely from his batting average.  Well, he raised that about 90 points today with four hits, including the game winning single in extra innings.  Yes, he made an out at the plate, but remember we never said his value comes from baserunning.  It's also worth noting that on a day when Joey Votto struck out three times, Francisco didn't K at all.  Honorable mentions go to Brandon Phillips (reached base three times in the leadoff spot and scored a run) and Bronson Arroyo (shrugged off a rough last outing to pitch 8 innings of two run ball.  He scattered two ten hits, but struck out five and walked none to minimize the damage). 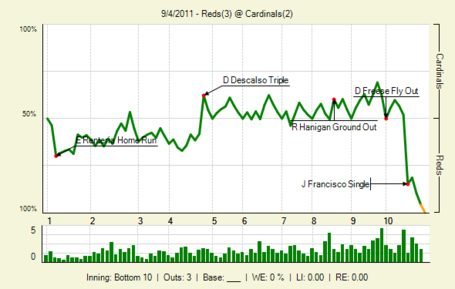