Share All sharing options for: Playoff Matchup: Rangers and Rays

I'm going to try to do a playoff match-up series in line with the series previews I did this season until I was crushed by the unrighteous fury of my semester from hell.  I'm calling them a match-up series rather than a preview series because a) I'm not going to get these all done before the teams start playing, and b) it's hard to do a preview when you don't even know the pitching probables because the Rays can't make up their minds!  It's like they're still in some kind of giddy haze from their amazing run to overtake the Red Sox....  Anyway, here we go. 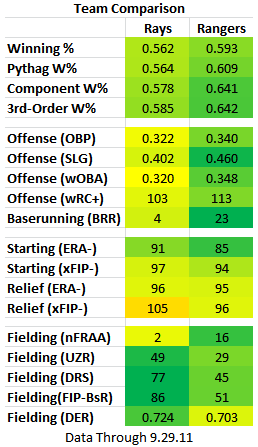 The Rays are the most impressively run team in baseball.  I really don't think there can be any question of this right now.  This is a team that started the season with a $42 M payroll after peaking out at $73 M last year, lost two key players in Carl Crawford an Carlos Pena, as well as pretty much their entire bullpen.  They have crap attendance.  And they are going to the playoffs for the third time in four years.

That all said, AL East or not, they are here by the wild card.  And based on pretty much every measure, they had a weaker showing in 2011 than the Rangers.  The Rangers, even after adjusting for their offense-inducing ballpark, have a better offense, a deeper rotation, and thanks to some deadline deals, a more impressive bullpen.  The only place where the Rays seem to be clearly superior is their fielding--by all measures save for nFRAA (which, as has been pointed out, often contradicts all the other measures...I just don't know about it), the Rays are probably the best fielding team in baseball.  And the Rangers are just very good.

But things happen in short series, and the Rays are a very good team.  And there are some things about the way the Rays are constructed that might even the match-up in a short series.  Let's take a look at the players. 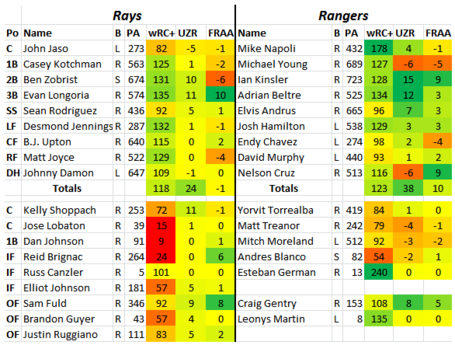 The playoff rosters aren't out yet afaik, so I'm just showing the expanded September rosters.  One of the key things that has happened is that the Rays have been commonly playing Sean Rodriguez over Reid Brignac at short.  Brignac had a decent showing last year, but was even worse than Paul Janish at the plate this season.  Rodriguez isn't his equal defensively, and he isn't great against righties, but he is not a black hole of production.  ...  that said, Brignac started the last three games, so it may be that they'll go with him in the playoff as well.

First half wonder Matt Joyce came back down to earth a bit in the second half (as did the even bigger wonder Sam Fuld), but this was bouyed by good second halfs from Evan Longoria and Ben Zobrist.  Also, WTF Casey Kotchman?  I really don't know if I believe he can be an above-average hitter, but he had his best season since 2007 this year...and arguably of his career given the reductions in overall offense between then and now.

There's not much on the bench for the Rays save for defensive specialists like the aforementioned Fuld and Brignac.  Dan Johnson didn't play much of a role on the team this year, but I could see him making the playoff roster if they wanted a power bat off the bench.

Remember all the scuttlebutt this spring about where Michael Young would play this spring?  Well, there you go, he ended up with the second-most PA's on the team behind Ian Kinsler.  Hey, also, did you notice Ian Kinsler cleared 700 PA's this year?  I didn't do well in my spring playing time predictions with this team...

The scary thing about this offense is that they've probably underperformed.  Young-Kinsler-Beltre all seem about where you'd expect them to be.  But Josh Hamilton has shown he's capable of far better than he hit this season (and yes, for the record, the Reds made a really bad trade there, and I should have said as much when it happened...I put too much worry into the drug-related risk with Hamilton and not enough in the basic truism that you don't trade away young star position players for young pitchers with potential...because young pitchers with potential break).  Nelson Cruz is capable of far better than what he showed too.  The only guy who really overperformed is Mike Napoli, who is impossible to bench too often when he's hitting like an MVP despite his lack of catching ability.

Overall...I think the season numbers actually look pretty close on offense once you replace Brignac with Rodriguez in the Rays lineup.  But for bust out potential, I think you have to like the Rangers and their underperforming corner outfielders. 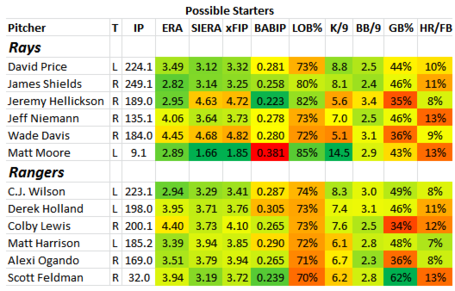 As alluded to above, there are no probable starters listed for the Rays, and game 3 is TBD for both teams.  So I'm just punting and listing the possibilities here.  If you just list the pitchers in rank order and compare the Rays to the Rangers, I think it's pretty clear that the Rays have the better top of rotation talent...but when you get to the #3 or #4 starter, the Rangers are at least competitive if not superior.  They are deep in the way that I thought the Reds had a chance to be--lots of very solid pitching up and down the rotation.  For the Rays, Jeremy Hellickson, in particular, does not have particularly attractive peripherals to go with his sparkly ERA, and might be at a disadvantage against virtually any of the Rangers starters.

The question really does come to match-ups.  The Rays just swept the Yankees to win their playoff spot by a game over the Red Sox.  But as a result, they've burned both of their top two starters.  Shields pitched on Wednesday, and Shields is apparently not pitching game 1 either (he'd be on 3 days rest).  So we're looking at one of Niemann, Davis, or Matt Moore for the start.  Moore's a huge prospect, and I frankly wouldn't be shocked to see him get the nod.  But who knows?  I'm guessing that games 2 and 3 would go to Shields and Price, respectively.

The Rangers, on the other hand, had the option to set their playoff rotation thanks to a comfortable 10-game lead in the West.  Former reliever turned starter (the Rangers have a few of those guys...) CJ Wilson will start game one, with Derek Holland going in game 2.  I'd expect to see Colby Lewis in game 3, but it hasn't been announced.  So we might be looking at a game 1 that favors the Rangers, but games 2 and 3 that might favor the Rays if their big two starters throw those games. 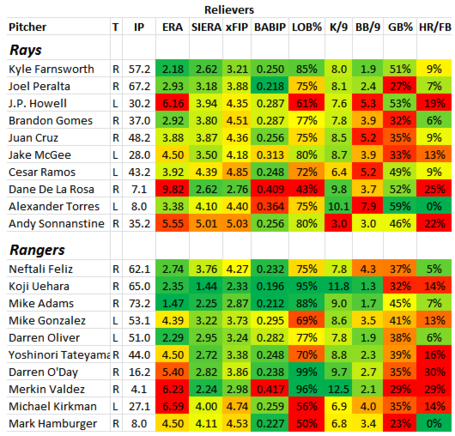 The Rays completely overhauled their bullpen this offseason, but it ended up working pretty well.  Kyle Farnsworth performed as the better of the two closers this season.  And Joel Peralta had another nice season in the pen to follow his success with the Nationals last year (though xFIP is not as excited about him as SIERA).  But after that, it's pretty much mix 'n match.  I will mention that Jake McGee has seen increased usage of late.  He was in the mix to be the Rays' closer this spring, and ended up starting the season in the minors.  But he has the stuff to be a difference maker against the Rangers' left-handed outfield/DH.

On the Rangers' side, Neftali had an absolutely terrible first half despite never suffering in the ERA department.  But he seems to have picked it up in the second half to at least some degree, perhaps in part due to the arrivals of a spectacular pair of setup guys in Uehara and Mike Adams.  If Neftali is right, the Rangers have the potential for a Nasty Boys thing in the playoffs this year.  I'm just not sure that Neftali is all better yet...

I'm looking forward to this series.  While the Rangers have better numbers on the season, I think the advantage at the top of the Rays' rotation helps even the series up a fair bit.  I also think that what the Rays do at shortstop might be a big deal.  You'd think that Rodriguez would get the nod against the lefties in games 1 & 2.  After that, who knows?  I think watching the Rangers' bullpen late in the game should be fun too.

Next up...I dunno, one of the NL series, probably, because I hate writing about the Yankees.