Dontrelle Willis.  D-Train grabbed his first win of the season in his 13th and final chance, pitching six innings of 3-hit baseball, on 3 earned runs, 6 Ks and 2 BBs. He went 1-3 at the plate with a base-clearing double and those 2 RBIs were decisive in a one-run game. Willis is a free agent after this season - though I suspect there's mutual interest to bring him back if the right contract can be worked out - but if this was his final game as a Red, it was an altogether fitting way to go out. With his raw enthusiasm on display again as he clapped his hands after cruising into second base, it's difficult not to want to see him continue his comeback in Red next year (provided he gets some pinch-hit opportunities). 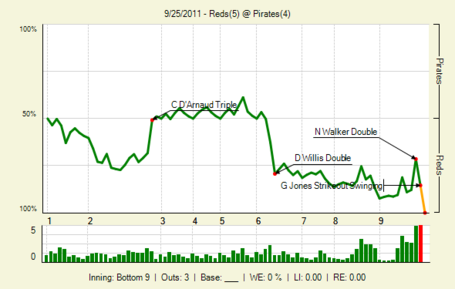