And it's a very nice "Participant" ribbon too. Reds swept in straight sets, 6-4.

Share All sharing options for: And it's a very nice "Participant" ribbon too. Reds swept in straight sets, 6-4.

Chris Heisey.  Drove in 75% of the Reds' runs in his first at bat back from the disabled list. Honorable mention goes to Brandon Phillips, who picked up two hits, including a double. Amidst the roster confusion, Phillips is having his best season in four years, potentially rivaling his 2007 30-30 campaign, depending on how this last month goes for him. Mike Leake earned another notch on his belt as a solid, if sometimes very hittable, member of the rotation. That's worth it's weight in gold for the Reds right now.

Rather than another Exchange-Tracking Fangraph, here's your up-to-date depth chart on Roster Expansion day: 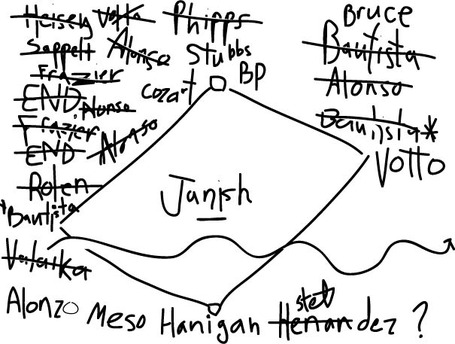