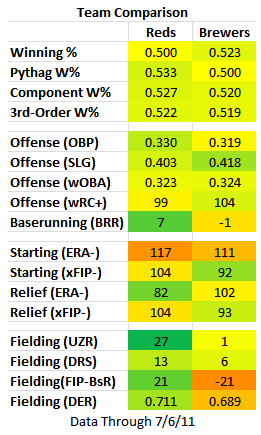 After looking like they were poised to take a step forward, the Brewers have lost 7 of their last 9 and are now a game behind the Cardinals in the NL Central.  Prior to this losing streak, the Brewers' overall team numbers made them look like the clear favorites in the division.  Now, they look pretty comparable to the other top tier of teams in the division (meaning the Reds and Cardinals--I'm not sold on the Pirates).

By record, they have a two-game advantage over the Reds.  But interestingly,  BPro's other overall measures of team performance--Pythagorean record (run differential), component winning percentage (based on stats), and 3rd-order winning percentage (components, plus adjustments for strength of schedule) show the Reds ahead of the Brewers.

Offensively, they're quite good, with terrific power (though mediocre on base ability).  After park adjustments, they probably have the hitting advantage over the Reds.  Pitching-wise, they have terrific peripheral numbers--terrific--but their results haven't been much better than the Reds.  Part of the issue might be their fielding, although the data are pretty split.  UZR and DRS have them as average to slightly above average.  But FIP-BsR and DER have them as below-average.  I trust the latter more than the former these days, and have always thought of the Brew Crew as a bad fielding team this year and in years past.  But there's uncertainty here.

Overall, these teams seem very evenly matched.  I'd give the Brewers a small edge because of their at least theoretical advantage on offense and pitching.

Miller Park favors lefties, and is a great place for them to hit homers.  Other hitting events tend to be depressed, however, resulting in average run scoring. 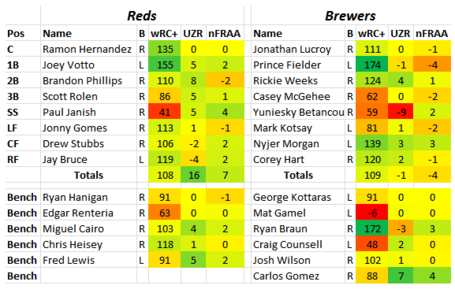 The big news here is that Ryan Braun is currently day to day with a strained calf, and is listed in the Brewers' official website as unlikely to return until after the All Star break.  If this is true, that represents a huge loss out of their lineup, and pulls the Reds up to at least even.

One of the Brewers who has struggled the most for the year is Casey McGehee.  While I don't think he was ever as good as his reputation became last year, he's a much better hitter than he's shown this year as well.  And he might be starting to heat up, with a homer and a double in his last three games.

On the Reds' side of the equation, the scuttlebutt is (once again) that Zack Cozart might finally be recalled from AAA today (please note: I'm writing this at 10:30 am, so I'm guessing that the news will be out by the time this is posted one way or another).  If he is called up and he starts, I think there's a very good chance he out-hits both Paul Janish and Edgar Renteria.  By how much, I don't know, but I think an 80-90 wRC+ (tad below league average) is a reasonable hope.  THT's Oliver projection has him at a .300 wOBA the rest of the season, compared to .277 with Janish and .298 with Renteria.  If he can still be a plus fielder as his reputation says he can be, that's a very nice addition to the club.

You can see where a lot of the disparity between the Brewers' numbers and results come from.  Zack Greinke's peripheral numbers are just insane.  But his ERA hasn't gotten any better since the end of May.  That's kind of mystifying, but he still scares the crap out of me.  Narveson has similarly had a bad run of it since May.  But he's a very good pitcher, especially given that he represents the back end of the Brewers' rotation.  Marcum is very good, but you knew that.  And Randy Wolf clocks in as the worst of their staff, but is again a solid mid-rotation starter who can beat you.

The Reds fortunately do not face Yovani Gallardo in this series.

I see games 1 and 3 as being the most winnable for the Reds.  Games 2 and 4 are within reach, though, if things go the Reds' way. 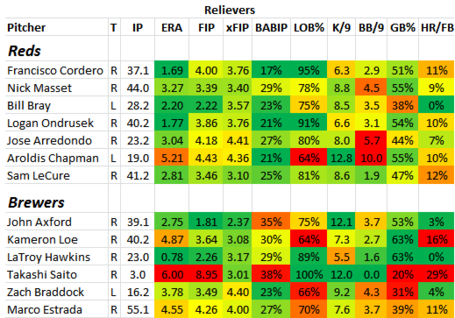 John Axford continues to be simply superb in his role as closer.  The Brewers also have three legitimate setup guys in Kameron Loe, LaTroy Hawkins, and former-closer-and-just-back-off-the-DL Takashi Saito.  Depending on which numbers you look at, the Reds have either been outstanding (ERA) or just kind of meh (xFIP).  I worry that, as last night's game perhaps demonstrated, the truth is closer to the latter.

Given the (hopeful) absence of Braun, and reasonably good pitching match-ups in at least two if not three of the games, I think the Reds have a good shot to tie and a decent shot to win this series.  I hope so, anyway.  The series with the Cardinals freaking sucked, and a series win would make me feel a lot better going into the All-Star break.  Despite all the crap we've seen in the first half, the Reds are still only three games out of first place.  They're very much still in this thing.