Somehow, St. Louis doesn't get added to the Philadelphia, Atlantas, and San Diegos of the world. Reds win, 9-8.

Share All sharing options for: Somehow, St. Louis doesn't get added to the Philadelphia, Atlantas, and San Diegos of the world. Reds win, 9-8.

Ramon Hernandez.  A lot of folks around here scoffed when Dusty first introduced the world to the concept of "Clutch Man Monie."  Nights like tonight should make us thankful that Dusty gave us the perfect description for his performance.  His double in the thirteenth inning drove in Jay Bruce, and probably could have gotten more if it hadn't been a ground rule double.  So kudos to the only Red that didn't make an out.  Honorable mentions go to Aroldis Chapman (ended the game with a 101 mph fastball, just like Major League), and Jay Bruce (finally rediscovered his plate presence with a double, a home run, and the walk that turned into the winning run). 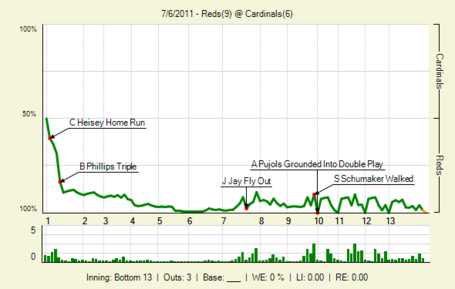