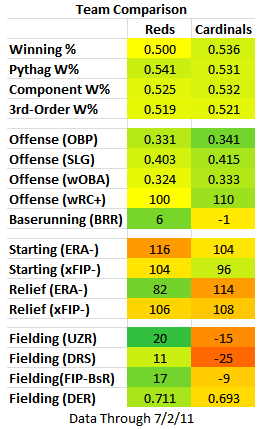 After avoiding a sweep in a rough series with Cleveland, the Reds begin what is a huge week against the Cardinals and the Brewers.  The Cardinals come first.  They have been the #1 offensive team in the National League thus far, and despite the loss of Adam Wainwright they have still had a top-tier pitching rotation.  They have not, however, had a good bullpen, and their fielding has left something to be desired.

Aside from their regular season record being substantially better, overall--and this is largely because of the fielding differences between the two clubs--they look to be a very close match for the Reds.  The Reds actually have the advantage in Pythagorean record/run differential (barely), while the Cardinals (barely) have an advantage using component statistics.

Looks at the lineups, pitching, and bullpen follow below the jump. 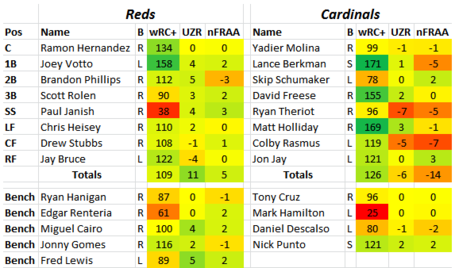 This lineup is scary enough as it is without Albert Pujols, who has a broken arm and is out until August.  But by sliding Berkman to first base and adding Jon Jay, who is a vastly better defender than Berkman in right field, the Cardinals haven't lost nearly as much as you'd expect.  Berkman's having an amazing bounce-back year, and Matt Holliday has quietly been the best outfielder in the National League.  Add to that a strong supporting cast of Rasmus, Jay, and Freese, and you have a very daunting lineup through which our pitchers must navigate.

The Reds get the top of the Cardinals rotation, which always seems to be the case.  Carpenter's ERA isn't as pretty as it usually is, but his peripherals show he's been throwing fine.  His ground ball rate is down a bit this year, so we might be starting to see some kinks in his armor, but he's still an imposing force and should be a tough match-up for Johnny Cueto.

Throwing even better this year has been Jaime Garcia, who is posting numbers like we used to see from Carpenter.  He gets tons of ground balls, doesn't walk anyone, and strikes a lot of guys out.  He's very, very good, and Volquez has his work cut out for him.

The Reds' best opportunity is groundball specialist Jake Westbrook.  Westbrook has numbers that look a lot like Sunday starter Mitch Talbot's, except that he gets almost 20% more groundballs.  That's pretty much how he's been most of his career, though the walks have been more frequent this year than in years past.  xFIP says this is a very close pairing, and both are guys who have probably pitched better than their numbers would indicate. 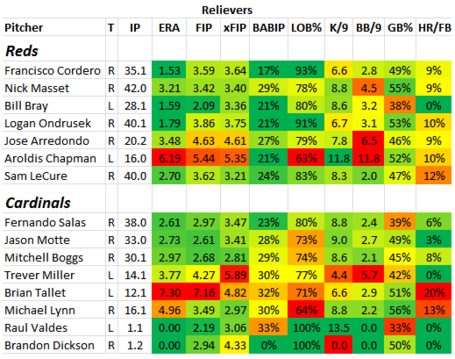 After searching for a closer for most of the first half, Fernando Salas has finally taken the Cardinals' closer job and made it his own.  He's been stable in that role for about a month, and has performed well.  Also good in the Cardinals pen is Jason Motte and Mitchell Boggs.  Another pitcher that is interesting is Michael "Lance" Lynn (everyone calls him Lance, but FanGraphs has him listed as Michael, which is his first name...my mother-in-law does that too, going by her middle name instead of her first...drives me nuts...), who is the team's current 6th starter and has thrown out of the pen as well as the rotation.  He's posted excellent peripheral numbers despite lackluster results, and remains a good-not-great pitching prospect.

Trever Miller, the main left-hander out of the Cardinals pen, is not having a good season.  His ERA is fine, but he's walked more than he has struck out.  From 2006-2009, he was striking out 9+ batters per nine innings.  Last year, that number fell to 5.5 k/9.  It's worse this year.  At 38 years old, I think he's about done, and it represents a good opportunity for guys like Votto and Bruce when LoRussa tries to play match-ups later in a game.

This looks to be a tough series.  The first and last games are probably the Reds' best opportunities for wins.  After losing the Cleveland series this weekend, they really need a win to make up some ground in the NL Central.  And, in a way, this is just a tune-up for the larger task, which will be the four-game series against the Brewers this weekend.  A winning week this week would go a long way toward getting the Reds back into the thick of this race.  A disastrous week, on the other hand...well, let's just not go there.  Go Reds!