Share All sharing options for: New York gets pretty heavy, girl I hope it doesn't crush you. Reds lose, 10-9.

Joey Votto.  He's good again!  So at least there's that.  Votto went 2-5 with a double and a home run for his third game in a row.  He also scored twice and drove in two runs.  Honorable mentions go to Miguel Cairo (pinch hit three run home run) and Sam LeCure.  SamWow is suddenly one of the most reliable bullpen arms, and he proved it again today by throwing two scoreless innings after Homer Bailey got knocked around like a Vin Diesel movie protagonist. 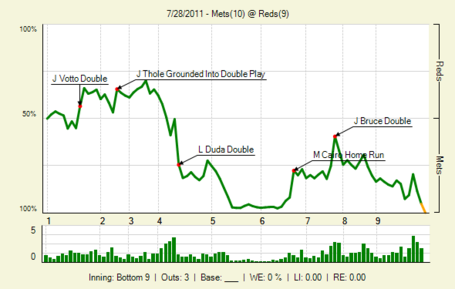