I'm not celebrating the fact that Jonny Gomes was shipped out to DC yesterday. He seemed like a good chemist in the clubhouse, mashed lefties 'til the bitter end and vastly improved the Reds' chances of winning a bench-clearing brawl.  But I understand why the Reds made the move.  Heisey will be able to start close to full time, while Frazier may get some additional playing time while he's up. And, at the very least, Yonder Alonso will improve the bench and get a look in LF as the Reds fall further out of the race. Along with the prospects returned in trade and wee salary dump, it's a minor improvement.

Gomes was exposed to waivers in '09 and non-tendered before '10, when his value to the team seemed highest. As it declined, the Reds decided to pay him the biggest salary of his career. Dusty never quite committed to strictly platooning him and the team never quite knew what to do with him. Despite three votes of no confidence, Gomes was graceful in departure:

"What an opportunity to play in such a baseball-rich community. At the end of [2008], I was kind of left in the weeds. Walt Jocketty and Dusty Baker gave me the opportunity. Came over here - started out of in Louisville - and had a great run.

"I'm bitter about leaving. I love these guys. I love where this team is at. I love where it's about to go. But as you see it's a business."

"This is a results-drive industry," Gomes said. "If the results aren't there, it might be time to move."

In tribute to the Power Hitter from Petaluma, the man who embodies pure joy in a sombrero and inspired more than a few Photoshop jobs and fake statistics on this very blog network, here's my Top 5 favorite Gomes moments from his time with the Reds (Jan. 19, 2009 - July 26, 2011):

September 28, 2010 (RR Recap). Jay Bruce made it possible, but it was Jonny Gomes who brought the most joie de vivre to the occasion, resplendent with bathrobe, goggles and cigar. Still want that bathrobe.

June 15, 2011. I had to find a 2011 moment to wedge in here. He's always been maligned for his defense and took hits from all sides this season. But he silenced critics, if only for a day, by laying out for a James Loney line drive, helping preserve a 7-2 victory over the Dodgers and push the Reds' record to four games over .500. This was only 5 weeks a go? 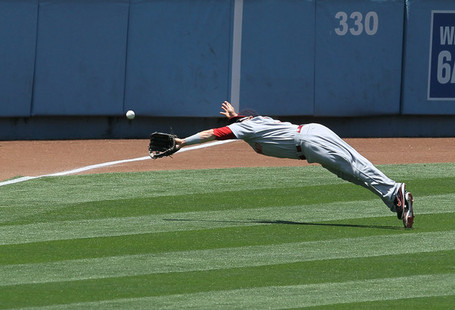 These two months have been the height of Gomesmania. Gomes' OPS peaked at .922, with 4 hits as the Reds stomped the Astros 15-6 on May 28. A June 12 inter-league pounding of the Royals was another highlight of the High Gomes period. Against KC, Jonny clubbed two HRs, stacked up 6 RBIs and reached base in 4 out of 5 PAs with 2 HBP.

April 8, 2010 (RR Recap). The Reds' very first win on the road to clinching the NL Central in 2010 came in dramatic fashion -  over their not-yet-rivals, the St. Louis Cardinals. Gomes ended a 1-1 stalemate by launching a walk-off homer to deep LF off Jason Motte.

August 13, 2009 (RR Recap). Another Reds' season was toast and next year's lineups were already being kicked around. Gomes teed off on his future club for three home runs at Great American Ballpark, putting a bright spot into an otherwise sweaty day spent hovering over computer screens.