Today was a bad game for the Reds. They almost one but they didnt'. Zack Cozart started the game off good. He hit a home run and we were off to a winning start against the Braves. Unforuntaly, the pitching. Because prospect Daniel Corcino was actually 45 years old, the Reds had to go with youngster Bronson Arroyo and boy was he bad. At one point Brain McCann and Jason Heyward hit back to back home runs off of him. That was probably the ticker that Bronson was done. But he wasn't. Because I dont know where to find the fangraph for the game, i'll make my own . 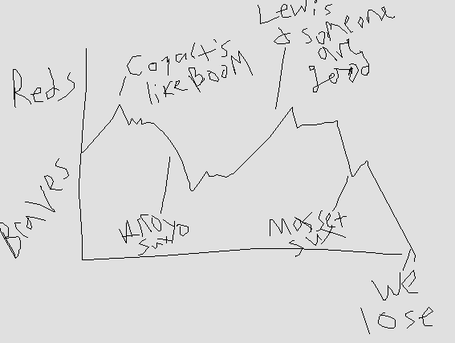 After Cozart was all like "I'm really good at baseball" the other guys weren't as good and the pitching sucked. Arroyo came in in the 7th and he shouldn't have. Something bad happened, but I wasn't paying attention to the game.

Then Masset came in during the 9th even though Chapman should have started the game and gone all the way until the 9th. He gave up back to back home runs for the SEVENTH TIME in the game. The home runs were given up to Mike Hampton and Eddie Perez.

I think Masset left and then Bray came in and he did something. After he left Kimbrel came in. This would have been exciting, but he's with the Braves, so it was bad. He struck out Stubbs and Gomes and then made Hanigan do something bad and we lost. I didn't really pay any attention to the game though.

Now I'm wearing a suit and eating veggie straws to appease Jutsin. I don't know where the Yankee hat came from. 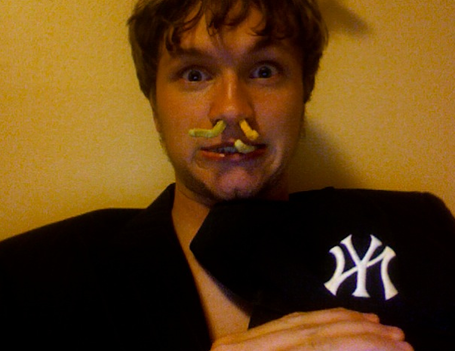 The Joe Nuxhall Memorial Day Player of the Game goes to Zack Cozart because he hit a home run and he is a shortstop who doesn't suck a lot.

* This is an asterisk. You may see it next to Barry Bonds name.

* Michael is back. I can be even less coherent than he.

* Veggie straws don't belong in your nose. They kind of itch.

Should I have attached a poll?