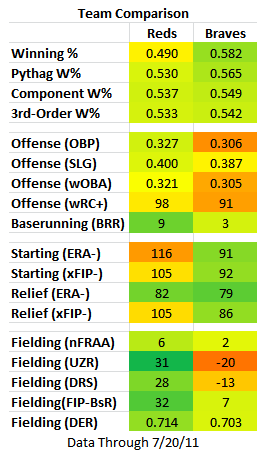 After opening the week with offensive futility in Pittsburgh, the Reds return to Great American Ballpark in search of some offense this weekend.  It won't be an easy task: they are taking on one of the best pitching staffs in the league.  The Braves' starters rank 3rd in xFIP-, while their bullpen ranks #1.  But, hey, it can't be much worse than 1 run per game, can it?

While the Braves' pitching is outstanding, their offense is not nearly as good.  They have fairly average power, but they haven't gotten on base well this year, resulting in well below-average hitting.  But their pitching is so good that the Braves rate out by all measures as a very good ballclub.  Perhaps they've overachieved a tad in terms of their record...but when a team has a bullpen like this, you might expect to see them beat their Pythagorean record by a game or two because of how well that talent can be leveraged.

It's worth noting that the Reds' offense dropped below 100 for the first time this year.  That's still pretty good given that they're an NL team (pitcher hitting is included), but it's the lowest it's been all year.  They still rank 4th in the National League by wRC+, and are tied with the Cardinals for the lead in runs scored. 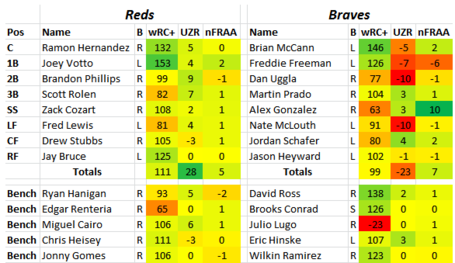 All I remember hearing about last time the Reds played the Braves was how awesome Jordan Schafer is.  His fielding has been good, but he's been dreadful as a hitter, just as projections forecasted.  Even more dreadful has been Dan Uggla, but he's been heating up of late and I'm worried is ready to open a can of whoop-ass on a team.  Also better than last time we saw them is Freddie Freeman, who has been hitting very well after a slow start to the season.  Even so, especially without Chipper Jones, this has not been a good hitting team.  They have lots of potential (Uggla, Heyward, McLouth), but not a ton of production thus far.  And we're pretty far into the season now.

Brandon Beachy's pretty interesting.  He was on the disabled list last time we saw the Braves, but he's back and has continued to pitch well.  Check that: he's been brilliant this year.  He's a fly ball machine, but he gets tons of strikeouts and very few walks.  This is all from a guy who was a surprise addition to the Braves' rotation, and, even though he's just 24, someone who was not considered a top-drawer prospect.  You'll see a lot of fastballs (four-seamers and cutters) in the low-90's, a very good slider and change-up, and a curve.

The other pitchers remind me a bit of the Pirates.  Jurrjens is a control specialist, and he's had a terrific (and probably pretty lucky) season.  Lowe is a ground ball specialist, although he gets more strikeouts than I think most expect, and frankly is one of my picks for the most underrated of starters.

Two things on the Reds.

I'm curious about Homer Bailey, because he's starting to look like a control specialist more than anything else.  His strikeouts are decent, but not what we expected from him.  And he allows his share fly balls.  But he's not walking anyone, and as long as he continues to do that he should see success.

Also, Arroyo: check out his peripheral numbers and compare them to Jair Jurrjens.  One is a Cy Young candidate.  One has folks terrified every time he reaches the mound.  There's just not much that separates them beyond a) their BABIP, and b) their HR/FB%.  And neither of those statistics tend to be very stable for pitchers.  I really think Arroyo's going to be ok. 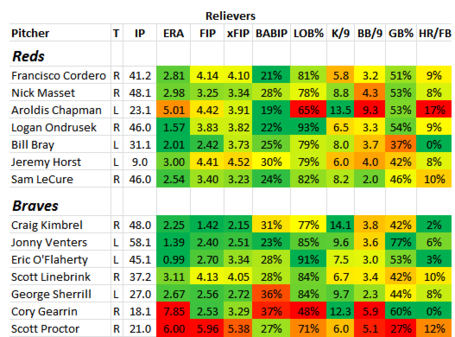 If you look at the ERA column, these look like fairly comparable pens.  The Braves still have the advantage, but the Reds look to have a lot of good options.

If you look at xFIP, the Braves still look outstanding--especially in their 1-2 punch of Kimbrel and Venters, who have arguably been the best 8th- and 9th inning guys in baseball this year.  The Reds, on the other hand...look pretty shaky.  I don't like to spend on the bullpen, but I guess I can understand why the Reds are considering deals to upgrade the pen.

I don't have a great feeling about this series.  The toughest game is probably Sunday against Beachy, but I'm not thrilled about the other two matchups either.  Fortunately, the Reds (should have) a sizable advantage on offense and in fielding, and that is enough to make the teams compare out fairly well.  The Braves have been the better team, but probably not by the degree to which the teams differ in the win column.  Go Reds!