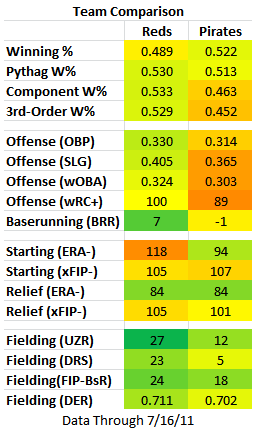 The Reds head off to face the upstart Pirates to begin the week.  The Pirates are one of the more interesting teams this year, having been picked to finish at the bottom (or near the bottom) by almost everyone at the start of the season.  And yet, somehow, they are a half game back of the Brewers, and are one of three teams ahead of the Reds in the NL Central.

The Pirates have a terrible offense.  And even then, they have injuries and absences that weaken it even more for this series.  But their pitching has been strong (though performing well ahead of their peripherals), and they have proven to be a good fielding team (a major departure to the last several years).  Despite their record, I think that the Reds have performed better as a team.  The Pirates' pitching has had far better results, but I don't see much to indicate that they have actually thrown better.  The Reds, on the other hand, have a clear advantage on offense and probably are a slightly better fielding team as well.

I've never seen this before, but if statcorner.com's numbers are to be believed, PNC Park is an absolutely brutal place for right-handed power hitters, at least in terms of home run numbers. 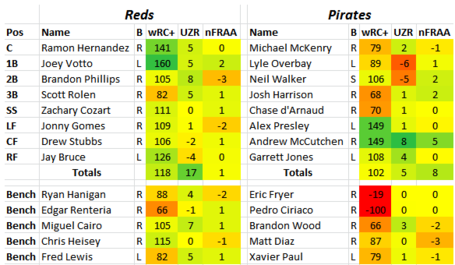 Andrew McCutchen has been phenomenal this year.  I don't know if the fielding numbers are real--he's been rated poorly the last several years--but offensively he's been crushing it all year long.  Given where the Pirates are, he's absolutely a leading MVP candidate.  Also, Alex Presley has been fabulous since arriving, though I think he's playing more than a tad over his head.  But there's not a whole lot more here.  There are some solid other hitters in this lineup (Walker, Jones), and Chase d'Arnaud is an intriguing prospect at shortstop.  But they're missing some of their other starters to either injury or ineffectiveness, with Pedro Alvarez and Chris Snyder being the biggest losses.

The Pirates are interesting pitchers because they focus so severely on just one skill.  Charlie Morton has reinvented himself as a ground ball machine this year, and it's working despite that being all he does.  Jeff Karstens similarly is thriving by basically focusing only on not walking people.  He doesn't strike many out, and he's not an especially good groundballer.  But he doesn't hurt himself, and he's proven very effective.  He's not a 2.34 ERA pitcher, but I wouldn't have expected in the preseason that he'd post a 3.83 xFIP by just preventing walks and letting the Pirates defense pick up the slack.

Dontrelle Willis debuted with the Reds last week and was pretty effective despite the 1:1 K:BB ratio.  I'm looking forward to seeing his second start tonight.  Overall, the pitching match-ups look pretty even in each game. 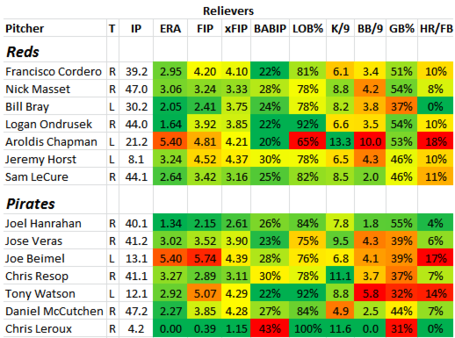 Joel Hanrahan has been lights out all year long.  He's absolutely for real, and is among the better relievers in the leauge right now.  The supporting cast, aside from Chris Resop, doesn't look as strong.  They are suffering for the lack of Evan Meek, and furthermore do not have a particularly good option against left-handers right now.  I think this bodes well for Votto and Bruce in mid-innings.

I'm thrilled that the Pirates and their fans are finally getting to have some fun this year after such a long period of suffering.  As a Reds fan, I can identify all too well.  But despite their success, their offense is very weak, their pitching has probably overperformed, and I don't think they're quite as good in the field as our Reds.  I like the Reds to win the series.