Homer Bailey.  Thanks to a great pitching performance, the Reds were able to begin the second half of the season with a series win over their biggest rivals, and one of the teams ahead of them in the standings.  Bailey went 7.1 innings, allowing only three hits, one of which was Lance Berkman's customary GABP home run.  He'll need to keep pitching that way for the Reds to make their move.  Honorable mentions go to Zack Cozart (two hits, including his first home run, now batting .400), and Francisco Cordero (shaking off his overuse before the All-Star Game and closing this one with a perfect inning). 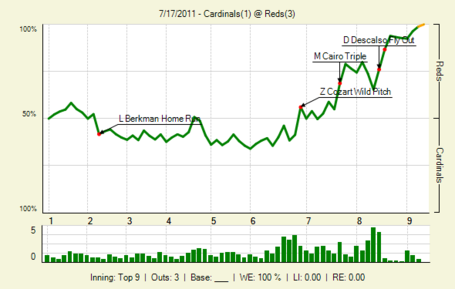