Losing's just another word for nothing left to lose. Reds lose, 4-1.

Share All sharing options for: Losing's just another word for nothing left to lose. Reds lose, 4-1.

Drew Stubbs.  Sure, he made a boneheaded baserunning error, but who didn't tonight?  Otherwise, he went 3-4 with a double and also walked.  He scored the Reds only run of the game.  Honorable mentions go to Edgar Renteria (two hits, one of which was a double [nice night from the top of the order] and two changed avatars) and Sam LeCure, who pitched 1.1 innings of scoreless relief. 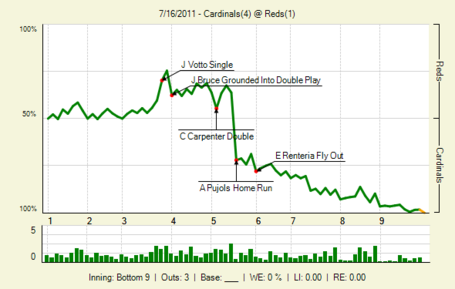