Cardinals series preview; time for a change in the bullpen?

Share All sharing options for: Cardinals series preview; time for a change in the bullpen? 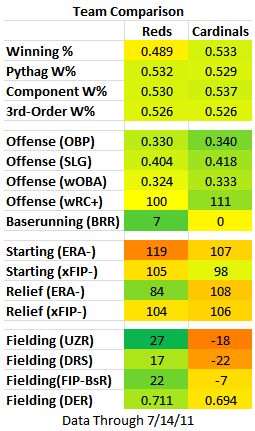 The first series following the All Star Break sees the Cardinals return to Great American Ballpark.  We just faced this team two series ago, so not much has changed since our last preview.

The Cardinals have been the best offensive team in the National League (the Reds are 4th by wRC+, which adjusts for park effects), so they hold an advantage there.  They also have had a substantially better rotation than the Reds (though both teams have seen their numbers worsen over the past two weeks), but a slightly inferior bullpen.  The Reds hold a clear advantage in fielding, which probably amounts to between 3-5 wins at this point in the season.  It's an enormous gap that should negate the advantages the Cardinals possess.

Overall, actual record aside, these two teams look very evenly matched.  The Reds hold a slight edge in Pythagorean record.  The Cardinals hold a slight advantage in component statistic-based winning percentage.  And they are dead-on tied in 3rd-order winning percentage.  Hopefully it will be enough to see the Reds win the series and start climbing back toward the top!

I'm surprised, because historically, I've seen GABP favor left-handed batters on home runs because of the shorter fences that direction.  I almost wonder if they have it backwards... 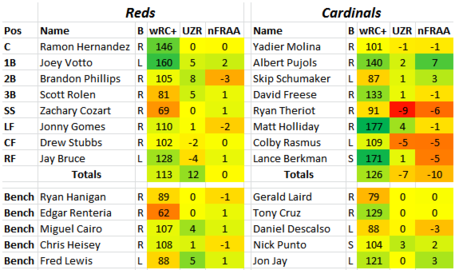 The Cardinals haven't gotten terrific production from their middle infield, but everywhere else they are either above-average for their position...or WAY above average for their position.  I don't think it can be understated how important Lance Berkman's revival has been to this team.  He doesn't belong in the outfield.  But as long as he's hitting .290/.404/.602, I don't think it matters all that much.

I'm not sure what Ryan Theriot is doing as a starting shortstop.  I know he's gritty and all, and has a fun name, but he's not an especially good hitter and doesn't have good range.

Zack Cozart hasn't delivered production that's much better than what Janish or Renteria offered thus far.  Nice average, but all singles and he has yet to take a walk.  But it's 16 PA's, so that doesn't mean anything.  I'm hoping we see him take off in this series.  Another guy I'd love to see start hitting: Scott Rolen.  In fact, we need him to hit to counter the likely regression by Ramon Hernandez.  It's hard to do it, but the time to cash in on Hernandez's trade value is right now if they can find a taker.  You hate to hope for a catcher injury on another team, but....

From the standpoint of the starters, the best chance for a win comes against Westbrook in game 1.  The next two games will be a lot tougher.

Jaime Garcia just got a nice contract extension: four years/$27 M plus two arbitration years.  He's in his second full year, but apparently accrued service time (see comments) while on the DL in 2009 as he recovered from Tommy John surgery.  Therefore, this deal buys out his three arbitration years, one year of free agency, and gives the Cardinals an option on the next two years of free agency.  I'm pretty cautious about giving long-term extensions to pitchers, but this one looks like a good risk--especially given that the last two years are team options.  At his current level of performance, Garcia would stand to earn at least $15 M per season, and probably more, in that first season of free agency.  This deal gives the Cardinals a decent discount on a player who really has become the ace of their staff.  He gets tons of ground balls, doesn't walk many, and piles up decent strikeout totals to boot.

I sure would like to see Homer Bailey's strikeout and ground ball rates tick back up.  Both are a tad below his career averages.  His walk rate is just fantastic, though... 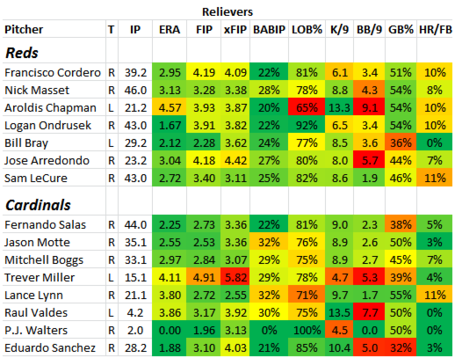 Following Francisco Cordero's disastrous series against the Brewers, we're seeing his xFIP climb above 4.00 for the first time this season.  His walk rate is inching back up, he has the lowest strikeout rate of ANYONE in the bullpen...the only thing he's doing well is inducing ground balls.  I still think there's a decent chance that he survives the year as the Reds' closer...but it's gone from near 100% in my mind to 60/40 in just one series.  And if anyone in the front office was considering picking up his 2012 option, I'd hope they've reconsidered by now.

Who would be the replacement?  If it were me, I'd be seriously considering giving the job to Nick Masset.  He always seems to start the season slowly, but has been quite good if not dominant from from May onward (ERA by month: April 4.40, May 2.93, June 2.38, July 1.80).  He has the best FIP and second-best xFIP of anyone on the team, and his overall numbers are now converging on his peripherals.  Ego-wise, I might hang with Cordero a bit longer.  But another disaster or two, and I think you have to make a move.  Call it "temporary" or something.  The Reds don't have much margin for error anymore, and blowing more tight games in the 9th inning really isn't an option if it can be prevented via internal moves.  I do not, however, support going out an acquiring a closer, at least not unless the price is super-cheap (say Chris Valaika and Kris Negron, for example).

On the Cardinals' end, I added Eduardo Sanchez, even though he's not yet on the roster.  Reports vary, but he might be activated from the DL near the end of the weekend.  The former closer-for-two-weeks strikes guys out, but that's about his only skill.