EDIT: I somehow forgot to add a link to the voting page, fixed. -jch

Today I had the opportunity to talk to Barry Larkin on behalf of the site, and I even managed to keep my pants on during the interview. Not an easy task. Let me first say that Mr. Larkin was easy to talk to and made my first interview as the interviewer go surprisingly smooth. I'm sure it sounds cliche but you can just tell he's a good dude.

At any rate, Barry is in Phoenix and promoting a pretty cool contest that Pepsi Max is running. Remember the "Field Of Dreams" commercials we've been seeing all year? Well, Pepsi Max and MLB are giving you the chance to create your own field of dreams and play against a team of living legends. Who wouldn't want to take the field with this handsome fella? 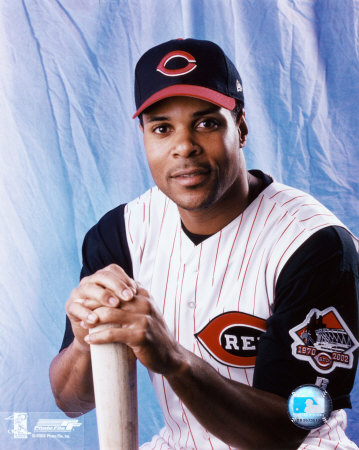 Details after the jump.

From the press release Pepsi Max was kind enough to send me:

Phoenix, Ariz., July 12, 2011 – As the Major League Baseball (MLB) All-Stars take the field, Pepsi MAX is giving fans the chance to create an All-Star roster of their own with a salute to the living legends of the game. Starting today through August 31, baseball fans across the country can go to MLB.com/PepsiMAX to cast votes for their favorite players at each of the nine positions. For each ballot cast, fans will be entered to win the chance to take on the winning Pepsi MAX Field of Dreams Team on their home turf next spring.

Beginning today, fans can vote up to 25 times per day at MLB.com/PepsiMax or can text PEPSIMAX to 41623 to receive instructions on how to vote via their mobile device. Each vote counts as an entry to be selected as one of four regional finalists. In September, the fan-elected PepsiMAX Field of Dreams Team will be announced and the four fan finalists will begin campaigning for their chance to take on this real-life fantasy team with ten of their friends in their local community surrounded by family, friends and baseball fans.

Barry will be up against Cal Ripken Jr. and Ozzie Smith, so he needs our help. Tell your family, tell your friends, hold pets hostage, do whatever it is you need to do to convince the people around you to go vote for Barry 25 times a day between now and the end of next month. Click here to go vote!

In addition to the Pepsi Max contest I talked with Barry about the Reds' SS issues, his favorite All Star Game moment, and other stuff.

(Courtesy of archive.org since I can't get SBN's widget to work)