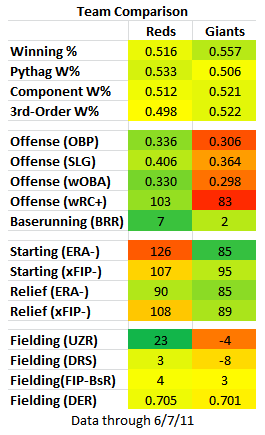 The Reds begin a dreaded West Coast Road Trip today, and start things off with a four-game series against the defending champion Giants.  The Giants went through a rough stretch that "ended" about a week ago, losing 6 of 8 and falling briefly out of first place in the NL West.  Entering the series, however, they have a two-game lead over the Arizona Diamondbacks.  BPro puts their postseason odds at 88.4%, which is the second-highest in baseball.  The Reds are up slightly at 12%.

They are an interesting team.  FanGraphs wRC+, which adjusts for park, ranks their offense dead last in the league.  This is especially true now, as they are without the services of Buster Posey, Pablo Sandoval, Brandon Belt, and Mark DeRosa.  None are expected to return for the Reds' series, though Sandoval is expected back next week and could potentially make a surprise appearance.

It's good that they have that weakness, because their pitching is amazing.  Their starting pitching ERA- is better than their xFIP-, which happens pretty much every year and is probably due to more than just the fact that their park is not conducive to the home run (though we don't know what, in fact, is the deal).  And that starting pitcher ERA- is, in fact, the best in the league.  Similarly, their relief pitching is also outstanding by all accounts.  Fielding-wise, they are probably somewhere in the vicinity of average, so the Reds can make up a little bit of ground there.

As always seems to be the case when comparing the probable starters, their pitchers look better in each of the matchups...although in the case, aside from Leake vs. Lincecum, they don't look like huge mismatches to me.  Perhaps the biggest story here is Ryan Vogelsong, who came up to replace Barry Zito.  Prior to this year, Vogelsong last appeared in the major leagues with the Pirates, and spent 2007-2009 in Japan.  Last year, he returned to throw in the Phillies and Angels organizations, and tallied much higher strikeout totals than before, as well as a lot of walks.  This year, as a 33-year old, he's pitching his brains out doing his best Colby Lewis impersonation.  I'm going to be driving to Florida the day he pitches, so I'm disappointed to miss him...I'm curious.  And I'm also sort of hoping it's the Reds who benefit when he turns back into a pumpkin. :)

I'm also interested to see what happens in Volquez vs. Sanchez.  Lots of K's, lots of walks...hopefully Volquez can carry forward something positive from his appearance vs. the Cubs. 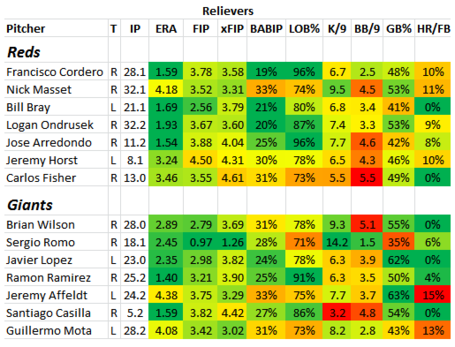 For the most part, these are pretty similar pens.  Brian Wilson's certainly the better pitcher, but he and Nick Masset's peripherals are dead ringers for one another (though obviously Masset's results aren't anywhere close).  The biggest difference maker is Sergio Romo, who just seems like a monster.  If you're into projections, look up Romo: he ranks with the best relievers in baseball, on a per-inning basis.  The interesting thing to me about Romo is how he is used, in that he has a LOOGY usage pattern: every year, he appears in more games than innings pitched.  I don't know why this is the case, but I'm sure someone around here does. 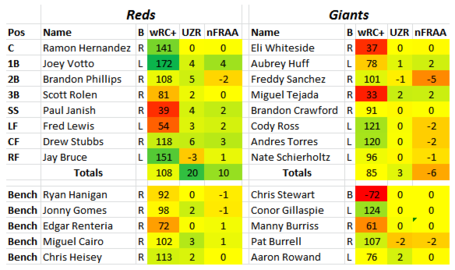 Much like the Cubs, the Giants have an edge on the Reds at SS and LF, but that's it.  They've gotten good production from Cody Ross and Andres Torres, as well as Freddy Sanchez, but otherwise this lineup is filled with miserable seasons.  Aubrey Huff had a 3-home run game last week, but otherwise has been dreadful all season.  Pat Burrell may appear in left field, but they appear to be afraid of his defense (rightly so) and so are favoring Schierholtz..  I do expect to see Pat the Bat in the lineup when Travis Wood pitches, however, because otherwise this is a pretty lefty-heavy lineup as currently constructed.

Another interesting note: we could well be seeing the end of the road for Miguel Tejada.  Prospect Brandon Crawford has hit better than Tejada while Pablo Sandoval is out (of course, so has Paul Janish!), and rumor has it that Tejada may be benched once Pablo returns next week.

So, it comes down to the Reds' offense vs. the Giants' pitching.  Or, the Reds' bad pitching vs. the Giants' bad hitting.  I love the big four Giants' starters (minus Vogelsong), but I think Reds have a shot here.  Four reasons:

I think we'll see a lot of low-scoring, well-pitched games.  Their pitching makes the Giants a quality team, but they're vulnerable right now.  Let's hope the Reds take advantage of it!
Minor programming note: the Stathead Series Preview (or whatever you want to call this thing) is going on vacation for the next 10 days, so I'll miss the Dodgers (who we just looked at) and, to my utter dismay, the Blue Jays!  This Disney World thing better be awesome for me to miss Jose Bautista.  I do expect to return in time to post a preview for the Yankees series.