Mike Leake.  The refrain over the last several weeks has been that our starting pitching has been sabotaging us.  Mike Leake didn't pitch perfectly, but he gave us what we needed: innings.  Leake went 8 innings and scattered ten hits, giving up only two runs.  Mercifully, the Reds only needed to use one reliever to finish up the game.  Honorable mentions go to Jonny Gomes (two hits, a home run, and four RBI) and Jay Bruce (three hits, two doubles, three runs, and an outfield assist). 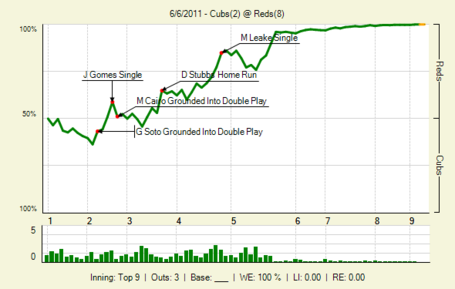