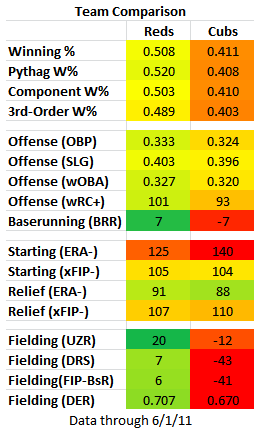 The Cubs return to Great American Ballpark riding a 6-game losing streak, most recently at the hands of the division-leading St. Louis Cardinals.  This should be a very winnable series for the Reds.  The Cubs are a below-average hitting team, with terrible baserunning and fielding, and the worst starting pitching in baseball (by results, anyway...and the Reds do face their two best pitchers).  Their one "strength" on the team is their bullpen, but even that is pretty thin after their two studs.

The Reds, on the other hand, are coming off a tough beating at the hands of the Dodgers over the last few days.  The offense continues to rate well in its raw numbers, and don't be deceived by the 101 wRC+: that number is 3rd in the NL, after park adjustments (they're also 2nd in OPS+ at 102).  Their fielding is also top notch, so what's holding them back is their pitching.  The starters continue to have better peripherals than results, while the bullpen flips that trend. if anything, the pattern we see with the bullpen is what we'd expect for the staff as a whole, as the fielding should push the numbers that direction.  No such luck, at least not so far...

Matt Garza's start is his return from the DL after an other-wordly initial 55 innings in the National League.  The guy was just unreal before going on the DL, so I can only hope he feels a bit rusy.

While not official, Tuesday is likely the return of Edinson Volquez vs. Doug Davis.  xFIP says that's the best matchup for the Reds.  I dunno...I'm not particularly concerned with Doug Davis, but Volquez's walk rate scares me despite the fabulous k-rate and ground ball rate.  His last AAA start didn't do much to belay my fears either (4 bb and 2 k's), despite the nice result.

Ryan Dempster has had a horrendous start to the season, but I don't see anything wrong with his underlying numbers--beyond the .330 BABIP, a 64% LOB% and a 17% HR/FB ratio. 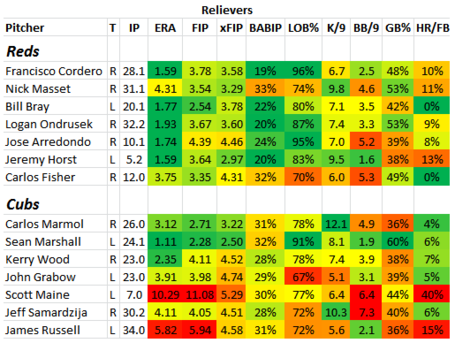 Carlos Marmol strikes a ridiculous number of hitters out, but also walks a ton and gives up enough fly balls that you'd expect that he'd be susceptible to the home run.  And Sean Marshall has unquestionably been a stud, and will probably be brought out to pitch to Votto and Bruce in every close game this series.  But outside of that, there's not much to fear in this pen.  Kerry Wood's also a setup guy, but he hasn't been as impressive as his 2.35 ERA would indicate this season.

There is one interesting quirk to the Cubs' pen: right now, they have more lefties than righties.  You won't see that very often, and it could present an opportunity for guys like Stubbs, Phillips, and Rolen in the late innings. 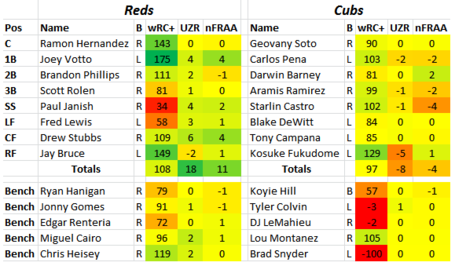 Not that this offense was likely to be well above average anyway, but the Cubs have been hit hard by injuries. They've lost their left fielder (Alfonso Soriano) and center fielder (Marlon Byrd), and two important bench bats in Jeff Baker and Reed Johnson.  The Cubs have a clear advantage at SS with Castro, and possibly left field (though that's more by default than anything), but otherwise I like the Reds a lot here.  The Cubs' best hitter thus far has been Kosuke Fukudome, who has good on-base skills but not much else. Carlos Pena is their main surviving power threat--I think he'll end up with a season better than last year's, though probably not quite to 2009 levels.

For the Reds...good hitting overall, but I'm starting to really worry about shortstop and also a bit about left field.  I'm getting very interested in Zach Cozart and Yonder Alonso...and Chris Heisey, for that matter.