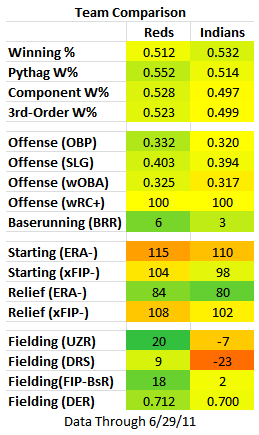 The Indians come to town tomorrow, and the Reds hope to repay them for the three game sweep they received in Cleveland last May.  I wish I had done one of these profiles then so I could compare it now, but looking over this Indians team...I just don't get it.

Their offense is pretty much dead-on average, so the Reds should have the advantage there (remember, the Reds' totals include pitcher hitting, while the Indians' do not).  The Reds get on base more, and have at least comparable home run power after park adjustments.  The Indians do have a small edge in pitching (both rotation and bullpen).  But the Reds hold what could be a massive advantage in fielding: depending on your metric of choice, the Indians' defense rates anywhere from average to putrid.

All of this is reflected in the Indians' secondary records.  While their .532 winning percentage has them tied for first in the AL Central, their Pythagorean record, component Pythagorean record, and 3rd-order winning percentage all indicate that they have produced more like a .500ish team.  And that's a .500 team who arguably has had players playing over their heads.

The Reds, on the other hand, are increasingly looking like a team that has gotten results that are poorer than their actual performance...and that bodes well for the rest of the season.  The biggest problem, the rotation, feels like it's been on the upswing lately, and if nothing else is finally healthy.  The offense is probably a bit overrated, but is still quite good.  And their fielding is top notch.  In a vacuum, this Reds team looks better than the Indians, especially playing by NL rules.

Let's look at the players. 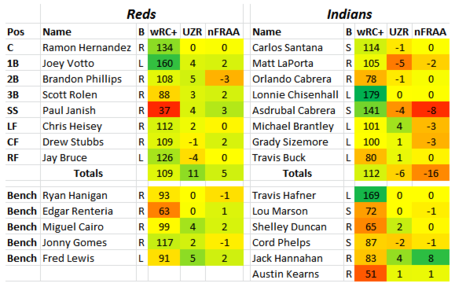 The Reds are getting a bit lucky here in that two of the Indians' most potent offensive weapons won't see much playing time.  Shin-Soo Choo is currently injured.  And Travis Hafner is not capable of playing in the field because of his shoulder and general ineptitude, and therefore will be limited to pinch hitting duties.

They do have Carlos Santana, who despite the poorer wRC+ than Hernandez this year is one of the top 5 catchers in baseball.  And they have Asdrubal Cabrera, who has had a brilliant first half to this season.  Lonnie Chisenhall is a top prospect of theirs who just debuted a few days ago.  Early returns have been great, but everything I've read about him indicates that he'll be a solid MLB regular who might appear in an All Star game or two.  A fine player, but not a superstar in the making.  Matt LaPorta is due back for this series (though I'm not sure which day he's eligible for activation, nor who will get sent down when he arrives--but I'd be shocked if it's Chisenhall), who is a decent (not great) power threat.  They have Grady Sizemore, who still has some power, but also has significant knee problems that have slowed him in center field.  And some people like Michael Brantley as a speed guy with some power.  It's a solid lineup, but aside from maybe Santana there isn't really anyone here who genuinely scares you.

There is currently a bit of uncertainty with who is going to be playing second.  Cord Phelps had taken Orlando Cabrera's job there, but OCab has started the last two games and might have reclaimed the job.  It probably doesn't matter much in terms of production.

The interesting thing about this squad of pitchers the Indians are sending out is that all are sort of similar in what they do, which is oriented around ground balls.  Fausto Carmona is an extreme groundballer, and will basically live or die with his infield defense (so far, he's done more dying than living, but he's better than the 5.89 ERA shows).  Masterson is a bit of a better pitcher in that he strikes guys out to go along with his ground balls.  Lastly, the only thing that Mitch Talbot does almost average-ish is avoid fly balls.

Masterson's the best of the three.  He's interesting, though, because for years people have been arguing that he's really a reliever masquerading as a starter.  He throws three total pitches--sinker, four-seamer, slider--and really doesn't have a good weapon against left-handers (no change-up).  For that reason, I think the Reds match up well against him, as their two best hitters are lefties.  Still, the Masterson game is going to be the toughest for the Reds.  If they can beat him, they have a very, very good shot at winning the series. 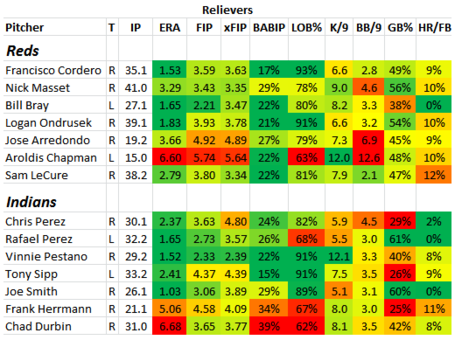 Something has happened with Chris Perez.  I don't know if he's progressed out of it yet or not, but his strikeout rate is WAY down and his walk rate is WAY up this year.  He hasn't really suffered for it yet, but when you are also an extreme fly ball pitcher, you have to expect he'll get shelled at some point.  Maybe the Reds can do that for him.

The rest of the Indians' pen is pretty solid.  Perez and Pestano have been superb thus far in the setup role.  Perez is another ground ball machine (you'd think the Indians would put a premium on infield defense given how many groundballers they have!), and will be a weapon against Bruce and Votto.  Pestano has shown off-the-charts strikeout rates in his 34 big league innings that are backed up by outstanding minor league numbers.  You have to think he's the closer in waiting at this point.  Pestano is the kind of guy that the Reds are really missing from their otherwise very solid pen: a shut down guy pitcher who is just unhittable.  Hopefully, Chapman can get back toward being that guy.

The Reds have a good opportunity here.  The Indians' offense gets a boost from LaPorta, but is still without Choo and Hafner for the series.  And the Reds should have a pitching advantage in two of the three games.  It's not that this is a bad Indians team.  But they're not in the same league as the Rays, a team that the Reds nearly swept this week.  Go Reds!