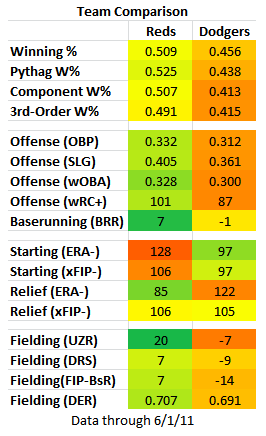 The Dodgers come to town 5 and a half games behind the current NL West leaders, the Arizona Diamondbacks. While they do sport a strong rotation--one that features at least three pitchers who are better than anything the Reds have to offer--their position players have collectively been dreadful. They don't get on base, they don't hit for power, and they do not field well.

On top of all that, their bullpen is something of a disaster right now. They've lost Broxton, Kuo, Jansen, and Padilla to injuries (physical and/or mental), which has them mixing and matching at this point. ... not that any of those four were performing particularly well anyway.

This is a winnable series. The biggest challenge will be dealing with the Dodgers starting pitching, as their top three guns will all throw in this series. But their offense is weak, aside from a few key guys, and their fielding has nothing on the Reds.

See below for probable pitchers and a lineup comparison.

As always seems to be the case (at least it has since I started doing these), the opposing team has the starting pitcher advantage in each matchup, at least based on performance to date. Each of the opposing pitchers is a legitimate top of the rotation pitcher. Kershaw gets the most press of the bunch, and rightly so, but Billingsley and Kuroda are only a step or two behind him. The biggest difference I see when comparing our pitchers to theirs is strikeout rate: Kuroda trails his group with a 6.6 k/9, but Wood leads the Reds bunch with 6.7 k/9. Thank goodness our fielders can go get it!

Also, regarding Johnny Cueto: we're still in very small sample land, but I would like to see his k-rate go up a bit. This might be a good opportunity for that. 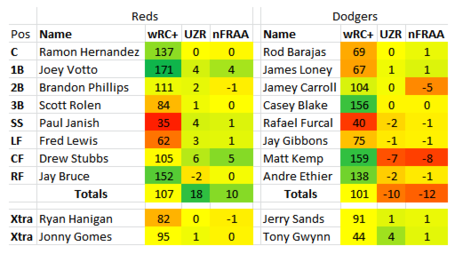 Based on performances so far, the Dodgers win at 3B and CF, push at SS and LF, and trail at C, 1B, 2B, and RF. And really, the only positions where I think they have a clear advantage are CF and SS. Matt Kemp is their top threat, and is off to a fantastic start. He looks much more like the player he was in 2009 than the lost body we saw out there last year...though his fielding numbers have to be concerning to Dodger fans. Rafael Furcal has missed substantial time already, but is a far better hitter than Janish, even if he hasn't shown it yet. With Casey Blake, you again have sample size issues due to lost time: he's a solid little player, but has overperformed thus far. I'd take Rolen over him whenever Rolen's healthy and on the field. Their major position player injury right now is Juan Uribe, but Jamey Carroll has been solid as a replacement--no power, but he's a prototypical gritty utility player who can get on base.

Jerry Sands is an interesting wild card. Still new to the league, he has good power and is a far more interesting offensive player than Jay Gibbons or James Loney. Lately Sands has been getting about 50% playing time, split between first base and left field. My feeling is that every game in which both Gibbons and Loney start, and Sands sits, is an opportunity for the Reds to win. 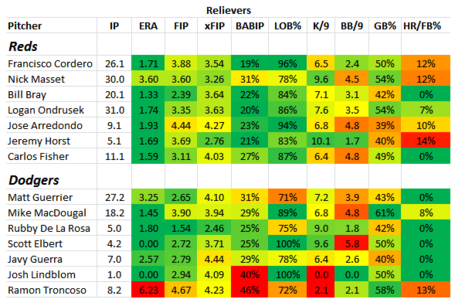 Rubby De La Rosa is the most interesting Dodger--he's a starting pitching prospect that they've brought up to relieve, and might actually be the favorite for the closer job until someone else comes back from the DL.

On the Reds, I have to say, the guys currently in the 'pen have just been outstanding. Everyone has an ERA under 2.00 except Nick Masset, and he's got the lowest xFIP of the bunch (save for Horst). Arredondo is my biggest concern of the bunch: those strikeouts are no where near where we hoped they'd be, at least through his first 9 innings. A lot can change in one outing, though.