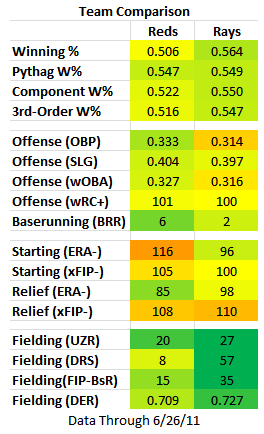 The Reds continue their tour of the AL East by taking on the Tampa Bay Rays to start the week.  It really doesn't get any easier.  While the Reds' Pythagorean record is good, and far ahead of their overall winning percentage, BPro's other ways of estimating team winning percentage--based on component statistics, and then components plus adjustments for opposition quality--show the Reds are playing only slightly below their mark.  The Rays, on the other hand, show strong agreement across the board.  They're good, and are currently two games behind the Yankees in the AL East.

The Rays are constructed much how I expected the Reds to work this year (note: this is not how they have, in fact, operated).  Their offense is about average: good power, but weak on base skills.  Their pitching, and especially their rotation, is quite good and has gotten outstanding results.  And their overhauled bullpen, while not strong, has been adequate.  But what really makes the Rays tick is that this is hands-down the best fielding team in baseball, and really are on a tier by themselves.

The Reds match up very well on offense (remember, the Reds' stats have pitcher hitting included in them, while the Rays' do not).  And while the Reds' fielding isn't in the Rays' class, they are in the thick of it for the title of second-best in baseball.  But the Reds pitching just isn't there.  And least not so far.  Let's look at the players.

Hellickson's getting a lot of attention for his excellent first half, but I didn't realize he'd exceeded his peripherals by as much as he has.  The 3.09 ERA is nice, but the 5.7--3.7--34% line isn't very impressive.  That match-up against Cueto would seem to be the most winnable game for the Reds.

David Price and James Shields, on the other hand, are legit front-of-rotation starters, and it will take some breaks for those games to go the Reds' way.

To editorialize for a second, James Shields is a textbook example for why I pay so much attention to peripherals when judging pitchers.  Last year, he had an ugly 5.18 ERA, and there was talk in the media of trading him or even demoting him to the bullpen before Matt Garza eventually was dealt to the Cubs.  Now, Shields has a 2.29 ERA and is in contention for the Cy Young.  What happened?  Well, he's seen the slightest of improvements in his strikeout, walk, and ground ball rates.  They have his xFIP at 2.98 this year.  But his xFIP was 3.55 last year, so we're talking about a half-run per nine equivalent, not a completely different pitcher.  The biggest difference, instead, were things that Shields has relatively little control over: a .341 BABIP, and a 68% Left On Base percentage on a great fielding team.  He got really unlucky.  And this year, he's getting a bit lucky--but he's also simply a very good pitcher.

I can only hope that Volquez starts to at least perform like his peripherals suggest he can.  Unfortunately, when someone is as extreme as Volquez is in his walk rate, I start to lose confidence that those generalized lessons apply... 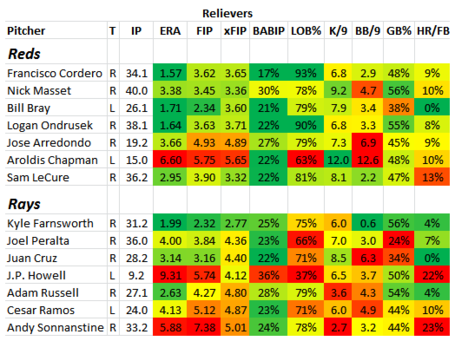 While the overall numbers suggest that the Rays' pen is a close match for the Reds', the current composition I think favors the Reds pretty well.  The Reds may lack a guy who has performed like Kyle Farnsworth (and goodness, he's really turned his career around over the last few years, hasn't he?), but they do have five legitimate quality relievers. I'm still excited about Sam LeCure's performance the other night in Baltimore.  And on top of that, they now have Aroldis Chapman, who has the potential to become unhittable on any given night.

The Rays, on the other hand, don't have a lot after Farnsworth.  J.P. Howell is a quality lefty reliever, and was even in the mix for some saves earlier this year before missing time.  Everyone else is just kind of "meh."  They have a kid named Jake McGee who has a lot of pontential, but he's been in AAA since the end of April.  The Reds should have some chances late against this bullpen. 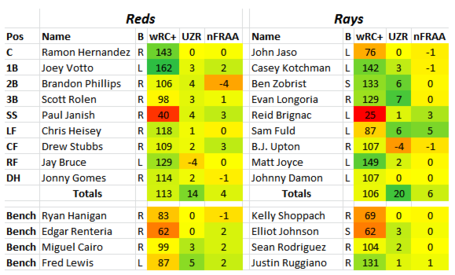 There's exactly one starting shortstop who has struggled more offensively than Paul Janish, and that's Reid Brignac.  He has missed a little bit of time with injury, and has been benched for brief spells from time to time.  But he still has the job.  It's surprising, too, since Sean Rodriguez would seem to be an alternative and has hit pretty well thus far.  But the Rays must be convinced that Rodriguez's fielding is not good enough to let him play there.  Elliot Johnson also gets the occasional start at shortstop.

Matt Joyce, Evan Longoria, and Ben Zobrist are the chief offensive weapons for the Rays.  Joyce, in particular, has been huge for them after the Rays lost Manny Ramirez to a failed drug test just after the season began.  I remember when there was talk that he might lose playing time to Sean Rodriguez this season, which always seemed ridiculous but looks even more so now.  I'm very surprised to see how well Casey Kotchman has hit this season, but I really don't expect that to continue.  Sam Fuld had a great week early in the season, and has settled in as a lite version of Brett Gardner.  His glove gives him some modest value, but I'd rather have Heisey's power.

The Rays have a very lefty-heavy lineup.  Therefore, I'd expect pretty big workloads from Bill Bray and Aroldis Chapman in this series.

It's good to see Phillips on the good side of average again.  Chris Heisey seems to be the main guy in left field at the moment.  In part this is because the DH allows Jonny Gomes to play without impacting the Reds in the field, which I find pretty appealing.  If the Reds could just figure out a solution for shortstop--if only there was a SS at AAA who could be called up!!--they'd look poised to massively outhit the Rays.

I have to say, I expected the Rays to look a lot better than they do.  Their starting pitching is tough, though, and their fielding is so good that the Reds may have a hard time scoring runs.  If they can score, they'll have a shot, because the Rays are much more about run prevention than run creation.  If the Reds can win game one, they have a decent shot at winning the series.  If they lose game one, however, I start worrying about a sweep...