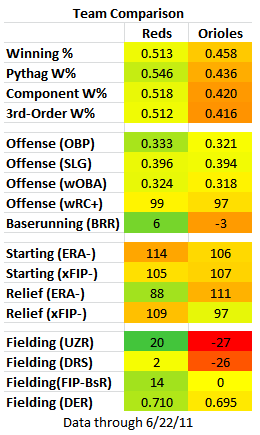 After facing off with the Blue Jays and Yankees over the past week, the Reds fly to Baltimore and face the weakest team of the AL East this weekend.  The Orioles looked to be on the upswing after a strong finish to last season, but have unfortunately continued to underachieve this year.

Offensively, they are a fairly close match for the Reds: they've gotten on base a tad less and don't run the bases as well, but the power has been comparable.

Pitching-wise, they also seem comparable to the Reds.  The rotation has been pretty solid, putting up better ERA numbers than the Reds.  The Reds, on the other hand, may have an advantage with the bullpen, although xFIP would say the Orioles relievers have actually performed better despite much worse results.

The biggest difference between these two squads, however, is their fielding.  The Orioles look like a really bad fielding team, especially when judged by the hit-location data.  The Reds, on the other-hand, are pretty clearly above-average, and may be among the best in the league.  This difference may mean as much as 5 wins at this point in the season, which is pretty amazing.

On the Reds side, the biggest news may be the impending arrival of Zack Cozart at SS for this series.  Cozart should be a plus defender, and might offer a better stick--and at least more power--than what we've gotten from Janish and Renteria.  It'd be hard to get less from our SS position, so I'm glad the Reds decided to finally try him out (assuming they, in fact, do!!).

Chris Jakubauskas is in the rotation largely because Chris Tillman yet again didn't perform as expected.  But he hasn't performed particularly well either.  A 32-year old minor league journeyman, Jakubauskas made a brief appearance for the Pirates last year after throwing 93 innings with the Mariners in 2009.  He throws a fastball, curve, and occasional change-up.  Even in the minors, this strikeout and walk rates have not been particularly impressive.  Should be a winnable game if Volquez can continue to find the strike zone.

Matusz hasn't had a very impressive return from the disabled list, but he's a very talented young pitcher.  He also may not even throw: while he is listed as probable, he has been dealing with a balky left hamstring and he might end up getting skipped.  Assuming he pitches, he throws a two-seam and four-seam fastball, a very good change-up, and a curve, with a very occasional slider for show.  So far in his career, however, he has shown himself to be a pretty extreme fly ball pitcher (though more in the 30% GB% range than 20% range), and Baltimore is a great place to hit home runs

Finally, Jeremy Guthrie.  Guthrie's a guy who has been espoused as a potential pick-up in the trade market this year, and he's proven himself to be a solid mid-rotation starter over the past couple of years.  He throws a bunch of different pitches: three fastballs (FF, FT, FC), slider, curve, and change-up.  None look overly impressive, however, at least in terms of strikeout rates.  He also allows plenty of fly balls.  What he does do, however, is locate: he's posted walk rates of 2.7 bb/9 in each of the last four years.  This is probably the game that is most favorable to the Orioles.  Hopefully Homer Bailey is ready to pick up where he left off, as he has been pretty impressive before going back on the DL.

The Reds will miss Zach Britton.  This is good for the Reds given that he's been quite good this year, though I would have enjoyed seeing the sinkerballer throw. 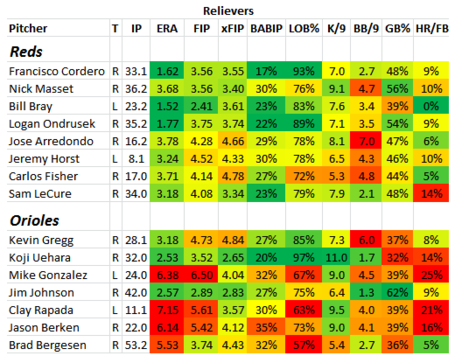 Their best weapons this year have been Koji Uehara (who really should be their closer, and is a very good pitcher) and Jim Johnson.  Mike Gonzalez has historically posted good numbers, but has gotten killed so far this year despite decent peripherals.  He will square off against Votto and Bruce in late innings, with Clay Rapada also available as a left-hander in the mid-innings.

Kevin Gregg may be the worst closer in baseball, at least among those who began the year in that role.  In past years he's thrown better than he has this year, but at 33 he may well be starting to lose whatever he has had that allowed him to claim the closer role over the past five years.  The 9th inning may be a real opportunity for the Reds this year. 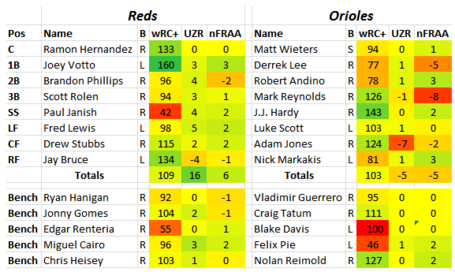 Two things strike me about the Orioles' lineup.  1. They are pretty old.  Derrek Lee, J.J. Hardy, Luke Scott, and Vladimir Guerrero were all good players in recent years, but this doesn't look like a team that is rebuilding.  2. They've really been underachieving compared to what I expected of them at the start of the season.  You'd certainly expect a lot more from Lee, Luke Scott was very good last year (though his shoulder is ready to fall off at any moment), and Vladimir Guerrero looks little like the guy we saw in the first half last year.  Hardy's having a very good year (he'd look good in Red, wouldn't he?), but has also missed a sizeable amount of time with injuries.

The main players I like in their lineup are Mark Reynolds and Adam Jones.  Jones, in particular, finally looks to be taking steps forward this year after seemingly having plateaued.  He won't walk much, but his other skills are exciting.  Reynolds is fascinating: insane strikeouts keep him off base, but you can't argue with his power.  He has been surging lately as well, helping to relieve fears that 2009 would be his last season.  I'm not sure that any other player could have success with a strikeout rate as high as his.

For the Reds, I don't think it can be understated how desperately the Reds need some offensive production from shortstop.  If Cozart can hit .260/.320/.400, he'd be a huge boost to the Reds' offense.  Left Field is looking up these days as well, with Lewis and Gomes hitting better this year, and Heisey, of course, coming off his huge game last night.  If that sort of thing continues, and Philles + Rolen can get rolling, this team should start scoring a lot of runs.

This series represents an opportunity for the Reds to get back on track.  Let's hope the Reds can win this series and undo at least some of the damage inflicted at the hands of the Jays and Yankees!  Go Reds!