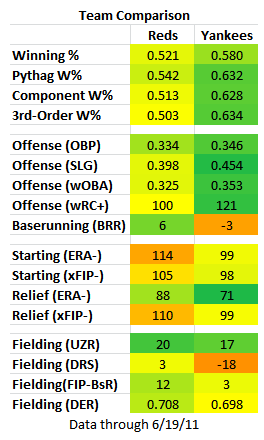 The Reds host the Yankees to start the week.  This is normally not a Good Thing for the Redlegs, and you can see why in the table to the right.  This team is loaded with hitting talent.  They get on base, they hit for power, and as we'll see in a bit, there are very few weaknesses here that can be exploited.  They also sport a strong bullpen (especially at the back end), and, in a departure from the Yankees teams of a few years ago, they are also at least average in the field.

If they have a weakness, it's their starting pitching.  But even there, where a lot of folks expected them to be a complete disaster after CC Sabathia, they've been surprisingly solid, posting better ERAs and xFIPs than the Reds.

Fortunately, at least this time around, I think the Reds actually match up pretty well.  They get to face the Yankees' three worst pitchers, and the Yankees don't look to have a great neutralizer in the bullpen for the Reds' main offensive threats--Votto and Bruce.  Well, aside from Mariano Rivera.  It really is about the best case scenario for the Reds when going up against the Yankees.

For the first time since I started doing these, I can say that the Reds have the rotation advantage in each matchup.  Ivan Nova is a ground ball machine, but otherwise looks pretty terrible.  Low k-rate, lots of walks...  it's been a back of the rotation starter performance, at best.  He looks Chien-Ming Wang, but with twice the walks and a bit lower GB%...

Brian Gordon is someone that I know nothing about.  But he's 32, his last start was his first in the big leagues, and his first MLB appearance since 2008.  Over the last year+ he's put up very good k/bb ratios in AAA...  But those didn't carry over into his first start, despite the decent outcome.  He's mostly notable because he's the replacement for the resurgent Bartolo Colon, who is on the DL with a strained hamstring.

Freddy Garcia isn't officially listed as the starter for Wednesday's game yet, but it's his turn in the rotation and I don't know who else they could go with.  Burnett and Sabathia would be going on short rest, and Colon is not eligible to return until the 25th (I think).  He's having a decent enough season thanks to an improved strikeout rate over last year, but Leake has been better and should be better moving forward.

For the Reds: Travis Wood's peripherals have steadily been regressing toward his ERA, rather than the other way around.  Facing the Yankees isn't a particularly good way to solve that problem either (though see note below).  Cueto continues to pitch very well.  The 1.68 ERA isn't real (obviously), but I'm pretty damn excited about his ground ball rate this year.  Coming into this season, he'd averaged 41% GB's, so 56% is a massive improvement. 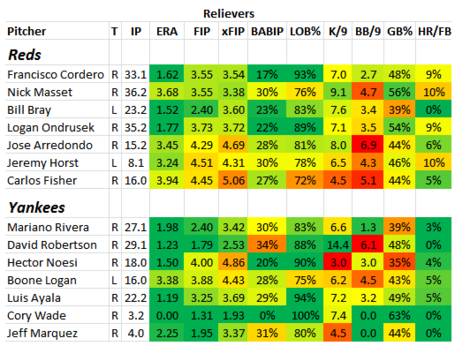 If it's the elite guys that are difference makers, the Yankees carry the edge here.  They have Rivera, obviously.  He's perhaps not what he once was, but he annually posts ERAs that are better than his xFIPs...he's one of the most unique pitchers in baseball history.  It may be, however, that David Robertson is the better pitcher at this stage in his career.  Different repertoire--fastball, cutter, curve--but his season line looks a lot like Carlos Marmol's: tons of walks, but my goodness look at those strikeouts!  He's tough.

If they have a weakness that can be exploited here, however, it's that Boone Logan is their only left-handed reliever.  And I don't see him as a particularly good pitcher, at least based on this year's performance.  In prior years he's averaged a higher (though very inconsistent) strikeout rate, and has always posted good GB%'s, but his walk rate always seems to be high.  If he's their primary weapon against Bruce and Votto in mid/late innings (prior to the 9th), the Reds might be in line for a couple of big hits from those two in this series. 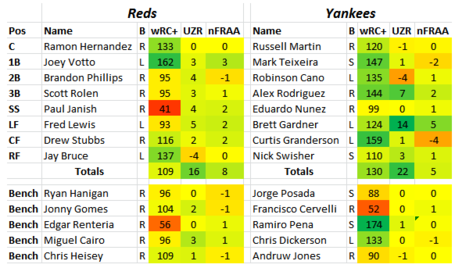 If the Reds have the advantage with starting pitchers, here's where the Yankees are the clear favorites.  The Reds have the advantage at a few positions, namely RF, 1B, and maybe C.  But everywhere else, even at SS with this kid Nunez replacing The Captain, the Yankees are clear favorites...and it's really not even close.  The Yankees really don't lose anything without the DH, as Posada hasn't been hitting well enough this year to force himself into the lineup when Martin and Cervelli are vastly better defenders.

I do think, if the Yankees have one vulnerability, it's that they are a bit left-handed heavy.  That's particularly true if Alex Rodriguez's shoulder is bothering him enough to weaken his offensive production (and it may not be).  But this could help Travis Wood out a bit in this matchup.  It also makes me happy that Arroyo isn't throwing against them this time around, given his historically huge splits against left-handers.

Finally, I think we've all said it.  But the Reds' SS situation is pretty ridiculous.  I have no idea why they haven't given Cozart a go.  But whatever.