We do better against teams with Theriot than teams from Ontario. Reds win, 2-1.

Share All sharing options for: We do better against teams with Theriot than teams from Ontario. Reds win, 2-1.

Miguel Cairo.  It was nice to see both Joey Votto and Jay Bruce break out of their minislumps and have big games, but Star of the Game honors go to Mr. Cairo.  His two run blast was the difference maker in this taut game.  Honorable mentions to those other two though, and especially to Bronson Arroyo for conquering his Canadian Boogyman.  He went eight strong innings, allowing only one run, five hits, and a walk.  If there wasn't such a hitter's bias around here, he'd probably have won JNMHSotG. 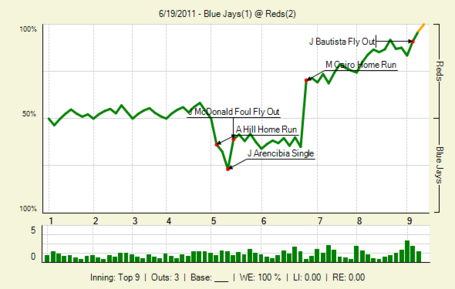