Francisco Cordero.  In a perfect world, the story of Francisco Cordero would be told in a movie called "Mr. 300."  Bernie Mac would play the successful closer, only to find out that three of the saves he recorded in Milwaukee didn't count.  He would come out of retirement, counting on Dusty Baker to use him in a save situation regardless of context or effectiveness.  Seriously though, the man notched his 300th save in impressive fashion, pitching a scoreless inning and striking out two.  He's now tied with Hall of Famer Bruce Sutter.  Honorable mentions go to Joey Votto and Jay Bruce.  The Reds only had six hits, and these gentlemen had four of them.  Two of those happened to be two run homers. 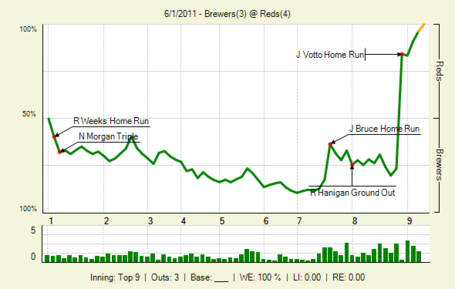