Your portrait of yours truly was really keen.  I hung it on me wall!  To answer your other questions, we do have hamburgers and fries in England, but we call French fries 'chips.'

P.S. Please forgive the lateness of my reply.

Scott Rolen.  Jelly Mort Rolen had three hits, including two doubles.  He also scored two runs and drove in three.  We'd been noting that Rolen was squaring up the ball well in his recent plate appearances, and this was the game where he put it all together and the well-driven balls started falling for hits.  Honorable mentions go to Fred Lewis (two doubles, a walk, two RBI) and Ryan Hanigan (two hits, a walk, two RBI). 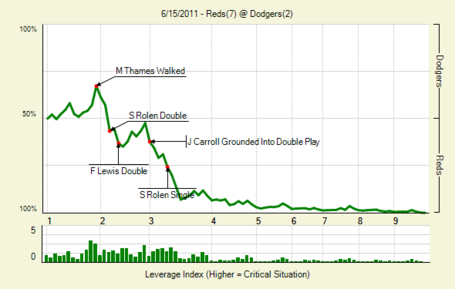