Share All sharing options for: Mr. Cuetohead, and his bucket of parts. Reds win, 3-2.

Johnny Cueto.  It's really satisfying to see Cueto take this next step in his development as a pitcher.  The Reds have never been particularly good at creating homegrown aces, so Cueto's name might float up the list somewhat by default, but that's not to take anything away from the job he's doing.  He pitched seven innings, giving up only one unearned run in the first, five hits, one walk, and striking out five.  Honorable mentions go to Drew Stubbs (three hits, two stolen bases, a run and an RBI), and Joey Votto (clutch RBI). 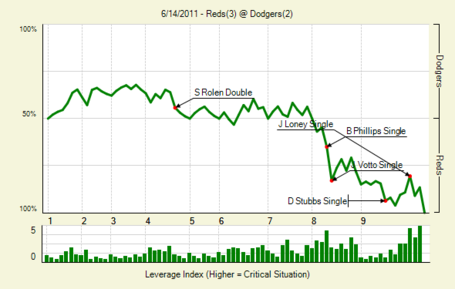