Share All sharing options for: We'll get there fast and then we'll take a loss. Reds lose, 3-2.

Kosuke Fukudome.  Kosuke F'd it to me with a 3-5 day and a game-winning single in the bottom of the 9th off Francisco Cordero. I had very little hesitation handing him this one, though if he hadn't picked up the game-winning hit, I might have suppressed the JNMHSotG hitters' bias enough to give it to Bronson Arroyo or the young Casey Coleman (6 IP, 6K, 2 ER). Honorable mentions go also to Ryan Hanigan and Carlos Pena. 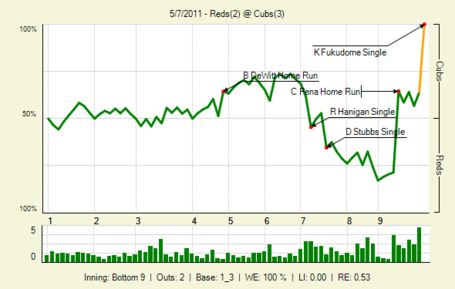