Share All sharing options for: We needed that one - bad. Reds win, 3-2.

Jay Bruce.  Bruce had the game-winning double in the bottom of the ninth.  It's not quite as dramatic as one of his other walk-off hits against the Astros, but with the Reds struggling, this game to bring the team back up to .500 seemed almost must-win in proportion.  Honorable mentions go to Joey Votto and Brandon Phillips.  The middle of the order took care of business just like they're supposed to. 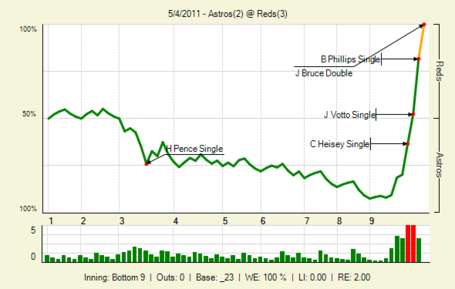