Share All sharing options for: Game 55: Reds vs. Brewers (THIS IS A HOME GAME!)

Clear. Winds blowing out to left field at 10-15 m.p.h. Game time temperature around 90.

Thank freakin' goodness the Reds are back home. Needless to say, a win would be sorely appreciated. It's Memorial Day, so maybe the Reds could win one in memory of that awesome season they had last year. I would like to add my thanks to all those who served that are reading this, including our own jch24 and Daedalus (those are the only two I know of). You can never get enough credit.

That being said, I'd like to introduce what will hopefully be our good luck charm, Exasperated Richard Schiff. 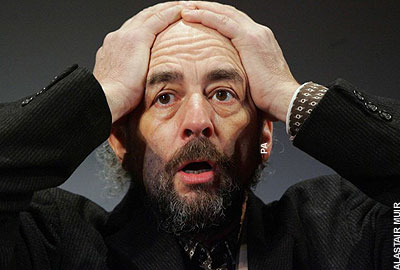 Exasperated Richard Schiff is unhappy that the Reds are losing. ERS wants the Reds to win. ERS would really just LOVE to get his hands off his head, but he can't until the Reds stop leaving so many guys on base. Hey Reds, how about helping our boy Toby out?

NOTE: Because he is a professional, and because he should not be associated with such frivolity (not to mention a non-wire photo in a thread), this poor attempt at a talisman was not done by RijoSaboCaseyWKRP, but UncleWeez, everyone's fourth favorite uncle after Fester, Buck, and, especially today, Sam.