Jeremy Horst.  A lot of players had good games, but many of them also made plays that cost the Reds runs, or failed to come through in heartbreaking ways.  So we'll give it to the kid making his debut.  He did pitch well, going 2.2 innings, striking out four and walking none.  He even had a hit and a go-ahead RBI.  He only allowed two hits, but unfortunately one of them was a home run by Brian McCann that let the Braves tie the game.  Plus, everyone else had made their Horst puns today, and I wanted in on the action.  Honorable mentions go to Jonny Gomes (4-5 with a double and two runs scored) and Drew Stubbs (3 hits, a double, 3 RBI, a run, a stolen base, and a backbreaking GIDP). 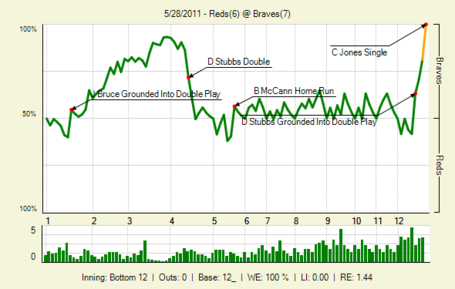