Leake flirts with danger but stays out of trouble. Reds win, 5-1.

Share All sharing options for: Leake flirts with danger but stays out of trouble. Reds win, 5-1.

Mike Leake.  He didn't blow away the opposing lineup, but he never does.  Leake threw six innings of one-run ball, walking three and allowing seven hits against just two strikeouts.  He also benefited from a couple of close calls at second - once when Chipper Jones got doubled off on a lineout to Scott Rolen and once when Martin Prado tried to stretch out a single against Fred Lewis.  But with everything this staff has gone through, not to mention Leake himself, this was a most welcome outing.  Honorable mentions go to Scott Rolen (two hits, started 2 DPs) and Ramon Hernandez (2R HR in the 8th).  Props to the bullpen for closing the door. 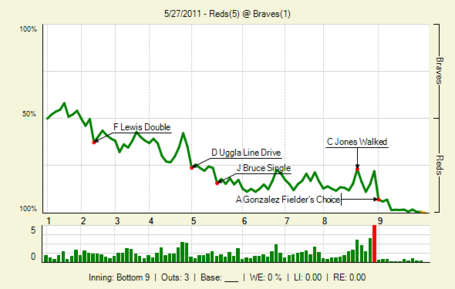