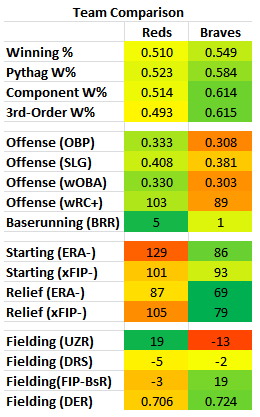 The Reds take on the Atlanta Braves this weekend, who are currently in third place, 3.5 games behind the first-place Phillies. If anything, the Braves look to have underperformed to date: all three win estimators (all from BPro) indicate that the Braves have played well enough to rank at the top of their division, above even the Phillies.

Obviously the Braves would like to continue to beat up the struggling Reds, who, after playing above their win estimators for most of the year, seem to have come back down to earth over the last few weeks.  It's been tough to watch.

So far this year, the Braves and Reds are pretty much opposite teams.  The Reds have been an offensive powerhouse.  While some of that is due to their home park, and obviously they have been struggling of late, their offense still rates as above-average.  The Braves, on the other hand, have been miserable at the plate, with a .303 wOBA and an 89 wRC+.  The Reds are a top-notch team on the bases, while the Braves are merely average.

Where the Braves have done well, however, is their pitching.  Their rotation has been superb, just as it was last season.  And their bullpen has been unreal, posting the best ERA- and second-best xFIP- in baseball.  In contrast, the Reds' starting rotation has struggled...although if you believe xFIP, they haven't thrown nearly as badly as they appear.  The bullpen has been better, though in truth an 87 ERA- is only an average pen. ... and xFIP isn't as bullish on our pen as I'd like.

Fielding-wise, the numbers right now are split on both teams.  The Reds have done better in metrics like UZR (although DRS rates them roughly equivalent).  The Braves have measured better in more whole-team metrics like DER or, a personal favorite metric of mine, FIP-BsR.  I believe in the Reds' fielding, although they've had enough time Gomes in LF and without Rolen at 3B that it could be that the average-ish numbers are correct.  With those situations rectified, the Reds should be an excellent fielding team.

As the overall team numbers would indicate, it looks like a wash for the Braves in each match-up based on performances to date.  All three of the Braves pitchers have posted sub-3.5 xFIP's, and the rest of their numbers all agree with their performances.  Tommy Hanson is a beast, and Derek Lowe is tremendously underrated given the crap I hear about him.  The biggest disparity between peripherals and ERA is seen with Jair Jurrjens, who looks to have gotten a tad hit lucky, and extremely lucky with runners left on base thus far.  But even so, he's had terrific control and kept the ball on the ground, which leads to pretty strong expected numbers (3.39 xFIP).

Of the Reds' starters, the most interesting is probably Mike Leake.  While his season thus far has been marred by poor on-field results and off-field dumbness, his peripherals are all very strong.  His strikeout rate, in particular, is way up this year, while the other numbers have been consistent with last year.  He's just not been able to strand runners very well this year, and has allowed a few more home runs than expected.  If he can keep his strikeout rate up, I tend to think he's going to fare well in the rotation moving forward.  Whether he can beat Tommy Hanson tonight, however, is anyone's guess.

Overall, the Reds have the better offense, and the Braves have the better pitching.  BPro's numbers would seem to favor the Braves in this matchup.  However, if there's an equalizer here, it's the current rosters: the Braves are without Jason Heyward, Nate McLouth, Peter Moylan, and (though they don't influence these games) Brandon Beachy and Tim Hudson (day to day).  And the Reds, on the other hand, are without Edinson Volquez...and the way he's pitched, that's a favor that favors the Reds!  Winning two of three in this series will be tough, but it would be huge for the spiraling Reds.