You can't say that games between Travis Wood and Roy Halladay are boring. Reds lose, 5-4.

Share All sharing options for: You can't say that games between Travis Wood and Roy Halladay are boring. Reds lose, 5-4.

Jay Bruce.  Suddenly Bruce is the only player that can hit worth a damn.  He went 3-8 with a home run and three RBI in this human centipede of a game.  Honorable mentions go to Travis Wood for once again going toe to toe with Halladay, and to Carlos Fisher.  Even though he gave up the winning run, he pitched five innings of scoreless relief up to that point.  Our bullpen long men have been routinely giving us innings-eating heroics in the past several games, and Fisher is the latest to perform the task manfully. 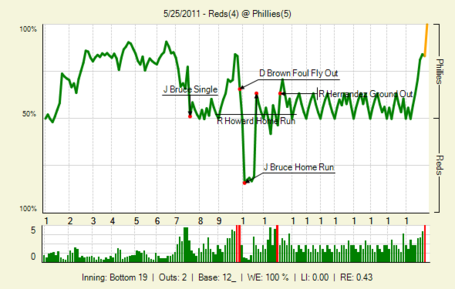