After a long intermission, today I'd like to continue the Scouting Reds Pitchers series (at least for today!) and take a look at the Reds' closer, Francisco Cordero.

Cordero is in the final guaranteed year of his contract with the Reds, as the Reds hold a $1 M buyout of his $12 club option.  I'd be surprised to see them pick up that option; I've long been of the opinion that the Reds will be lucky to have Cordero survive in the closer role through the life of the guaranteed portion of the contract.  But let's take a look at what he's doing. 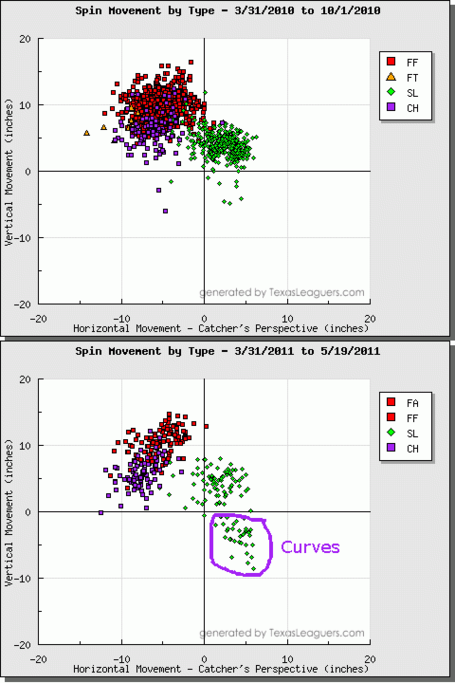 Here's the big surprise for me: Cordero has added a new pitch!  In the bottom-right, you can see he has a new pitch this year that moves like a curveball.  He might have thrown a couple of them in 2010, and threw none in 2009.  But this year it has become a regular part of his arsenal.  While I haven't been able to confirm this with a photograph of the grip, several folks on twitter confirmed that they've seen him throw a number of curves this year.

He also continues to throw a four-seam fastball, slider, and change-up.

Just 2011 this time, but you can see that curveball cluster in the bottom-left this time.  It wasn't there in 2010.  Cordero's curve comes in at ~78 mph on average, well below the velocity of his other pitches.  His fastball is averaging 93 mph this year, which is down about 1 mph from last year (though some of that may be early season velocity drops that most pitchers see in April).  He throws a hard slider in the upper'80's, and uses a change-up that comes in a few mph slower than that.

I'm cheating a bit here.  I don't trust 2011 data to be particularly reliable when talking about outcomes, so while I'm showing accurate usage data (through May 19th), the outcomes for fastballs, sliders, and change-ups are based on the past 162 games.  I did go through and manually figure outcomes for his curveballs in 2012, however.

What we see is that the curve is still a small part of his offerings.  Traditionally, Cordero has been a two-pitch pitcher, relying primarily on his fastball and slider. This year, in addition to working in the new curveball, he has also shown a massive uptick in his use of the change-up.  According to both BIS and pitchf/x pitch classifications, his change-up usage has risen from 7-10% in 2008-2010 to 26% in 2011.  Slider usage has been more or less constant since 2009 (the uptick you see on FanGraphs or other pitchfx sites is because the curves are misclassified as sliders).  Therefore, he's "paying" for this increased usage of the change and curve by decreased usage of his fastball.  He's averaged ~63% usage of the fastball in 2009-2010, so this is a major change in approach to hitters.

Looking at the outcomes, the slider has still been a good pitch for him in terms of strikeouts, but it does result in a lot of fly balls.  His change-up, on the other hand, while inducing a below-average whiff rate, is very good at producing ground balls (and ideally ground ball outs).  His curve, based on a very small sample, is a fly ball generator, but has done a good job of inducing whiffs thus far.  We'll see if that holds as word gets around that he's throwing it.

Usage data below are entirely from 2011, and therefore may be subject to significant small sample size issues.

Against righties, Cordero has tended to ignore the change-up and rely heavily on his slider this year.  Perhaps surprisingly, the main time he throws a majority of fastballs is with two strikes.  Otherwise, he's usually pitching off the slider, with a few curveballs thrown in, presumably keep hitters off balance.

Against lefties this year, Cordero has brought out the change-up and has used it heavily.  He has thrown it almost 50% of the time to start a batter, and has used it nearly a third of the time with two strikes.  Even with a full count, he uses it about half of the time.  Change-ups are commonly used against opposite-handed hitters, but this is a new thing for Cordero: in 2010, he used his change-up 14% of the time against lefties.  This year, it's all the way to 46% overall, and is easily his most commonly used pitch against sinistrous hitters.

What we've seen thus far from Cordero is a very different approach than we've seen from him in the past.  No longer relying on his fastball to just blow hitters away, he's relying on change-ups to left-handers and a mix of fastballs, sliders, and a new curveball to hitters.  It's hard to say what the end result will be of this new approach, but early returns, as evidenced by his 55% GB rate, reduced walk rate, and a 3.73 xFIP, are encouraging (last year's xFIP was 4.37!)...even despite the drop in his strikeout rate.

Cordero doesn't need to be the best closer in the league.  The Reds just need him to pitch well and come through in save situations most of the time.  My guess is, with these adjustments, he'll be good enough in the 9th inning that the Reds can focus their worries elsewhere...at least until they buy out his contract this offseason.