Share All sharing options for: Cubs hand this one to the Reds, 7-5.

Well, Brandon Phillips went 2 for 3 with two walks.  Not a bad game.  But tonight I think this is only good enough for an honorable mention, since the real star of this game has to be the Cubs defense.  They gave up 7 unearned runs!  Honorable mentions also go to Scott Rolen, who was 2 for 3 with a walk and a double, and Nick Masset, who pitched a scoreless ninth for his first save of the season. 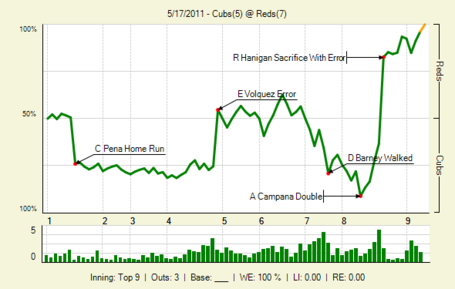