Share All sharing options for: This year, we can beat you too. Reds win, 9-7.

Jose Arredondo.  A lot of players had very good games today, but there's not one standout great player.  So instead, we're going with the feelgood story of Jose Arredondo making his return to the major leagues and throwing a perfect inning of relief.  Honorable mentions go to Ramon Hernandez (2-4 with yet another home run), Chris Heisey (a pinch hit home run that ended up being more necessary than initially thought), and Travis Wood (not a pretty outing, but six innings and only two runs allowed).  And a very special tip of the cap to Francisco Cordero who finally closed this game out and showed some passion and swagger while doing so. 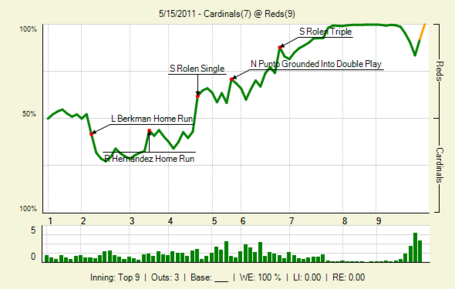