Share All sharing options for: That's how we do it in Cincinnati. Reds win, 6-5.

Joey Votto.  The reigning MVP was 2-5 with a double, walk, and a pretty important hit at the end.  Bonus points for using the word "bugaboo" in his post game interview with Jeff Piecoro.  I'm pretty sure that if Mr. Votto asked me to have his children, I wouldn't refuse him.  Honorable mentions to Scott Rolen (3-5 in his first game back), Brandon Phillips (2-4 and had the hit that made Votto's heroics possible) and Nick Masset (2 scoreless IP, 4 K). 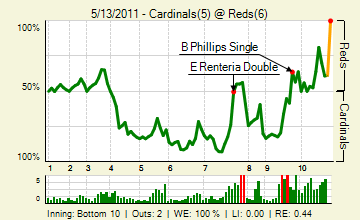